← Russian Submarines Target ISIL (Daesh) in Syria from Mediterranean. What Does it Mean?
Spiders in a Jar: Saakashvili, Avakov, Poroshenko and Ukraine’s Idiocracy+ →

NEW EARTH SHIFT REPORT IS OUT!

THE BATTLE FOR EURASIA! 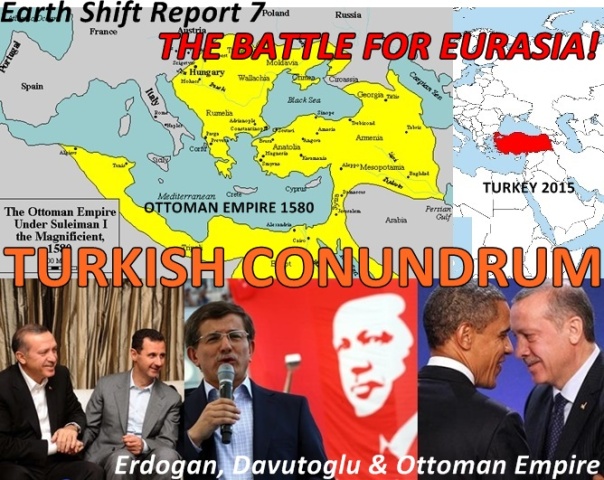 Read in this report:

Is Erdogan trying to resurrect Ottoman Empire?
Has he lost his mind or is confrontation with Russia a well-thought out strategy?
Is Ahmet Davutoglu Erdogan’s Gray Cardinal, or is he the real puppet master?
Can Turkey Block Black Sea straits?
Who is wagging whom: US Erdogan or Erdogan US?
What will Russia do?

The region is boiling over and may blow up at any moment. Everything that is happening in this region, however unconnected it may appear, is invisibly orchestrated from one and the same center. In this report we’ll connect all the dots and form the full picture!​

​BONUS!
Who controls whom? What does the body language tell us? Can you tell by these images? Photo album of Erdogan with Davutoglu, Obama, Putin and Assad. They tell quite a story! With Lada’s body, eye and hand language interpretations.

The Great Earth Shift, tectonic change and human society
New Turkish provocation – Russian destroyer fires warning shots against Turkish boat
The money trail: Who organized the flood of refugees to Europe?
ISIL oil = Turkey’s bounty
About the ‘free’ market hoax and how oil prices are formed
Qatar: Terrorist State Extraordinaire of the Middle East
Al Jazeera Network – at the service of ISIL and Turkey
Who ordered the Russian passenger plane catastrophe over Sinai, Egypt
The invisible link between Qatar and Turkey
How Russia spoiled Turkey, Qatar and USA’s game
It’s 1944 all over again. What are US/Germany/UK/France doing in Syria
What is Turkey’s army doing in Iraq?
World’s largest ethnos without a state: the wild card of the Kurds
​ERDOGAN’s Turkey
Who gave order to shoot down Russian Su-24 jet?
Is Erdogan mad or is this a part of a well-though-out plan?
Devolution of Erdogan and Turkey
Bulgaria in the dark: from Ottoman Empire to NATO and EU
Russia – Turkey relations
Ahmet Davutoglu – Erdogan’s Gray Cardinal or the Hitler of Turkey?
Neo-Ottoman Pan-Turkism and Resurrection of the Ottoman Khalifate
How Turkey infiltrated post-Soviet space
The real reason Russia agreed to enter WWI
How Russia was swindled of Constantinople and Bosphorus and Dardanelles Straits
Erdogan and Turkey – stepping on Saakashvili and Georgia’s rake?
The volatile issue of the Black Sea Straits – Can Turkey close Bosphorus and Dardanelles?
Will Russia press for the transfer of the Black Sea Straits?
The 1992 Black Sea Straits incident
Deja Vu: Who benefits from the destruction of Turkish – Russian relations?

Stay tuned for next ESR: BLACK SEA GAMBIT – it’ll take over where TURKISH CONUNDRUM left off! A preliminary list of explosive events surrounding Black Sea inside this report!

The Battle for Eurasia!

Read this report in conjunction with:

Go to ALL EARTH SHIFT REPORTS

← Russian Submarines Target ISIL (Daesh) in Syria from Mediterranean. What Does it Mean?
Spiders in a Jar: Saakashvili, Avakov, Poroshenko and Ukraine’s Idiocracy+ →
Loading Comments...