According to the best standards of Western democracy, the same ‘peaceful’ Maidan protesters who mutilated unarmed policemen in February 2014 Kiev, burned people alive in Odessa and bombed Donbass, have attacked Russian embassy in Kiev twice through the night of March 5-6 and throughout the day of March 6th. Police stood nearby and watched; as is normal in Ukraine, it didn’t protect the embassy, nor it interfered in any way.

The ‘protesters’ were apparently worked up about the trial in Moscow of an ukro-nazi follower Nadezhda Savchenko. As is also customary in the disgusting thing Ukraine has turned into, many of these violent thugs were high on drugs.

Savchenko was captured by DNR almost a year ago after it came out that she was culpable in the death of 2 accredited Russian journalists working in Donbass where they reported on the war. Their vehicles were shelled en route after Savchenko passed to Ukraine army their coordinates. The journalists were killed. Savchenko was a member of the ukro-nazi (sworn Ukraine fascists, followers of SS, Hitler and Bandera/Shukhevich) battalion Aidar and was involved in assassinations of a number of other people. For some reason she is often referred to as a ‘pilot,’ however, as far as I can see, she never flew, but was primarily engaged in establishing and passing on the coordinates for attacks on various targets of importance. She also enjoyed killing personally as a sniper.

The Kiev government, Poroshenko, Yatsenyuk, the Rada, as well as these ‘peaceful protesters,’ demand Savchenko to be released and trial stopped.

Savchenko is being tried in a Moscow court.

Who is pulling the strings of these very well-organized ‘spontaneous’ protests? The same entities as always. The trail, as usual leads to those who are engaged in the direct foreign management of Ukraine. Washington and USA have organized this little stunt with attacks on the Russian embassy to try to intimidate Russia and remind that they can direct this mass of violent idiots against Russia, DNR/LNR, Crimea, or Pridnestrovie, at any moment. As always, this is an intimidation and reminder that the big mafia boss from across the ocean is watching, the messy election campaign in the USA notwithstanding (read: Lada Ray’s First US Presidential Elections Prediction: REVOLT IN REPUBLICAN AND DEMOCRATIC PARTIES).

When will they pay?

I am sure the sponsors of these ‘peaceful’ protests to free up a sworn assassin and assassins’ helper are happy and proud of how well their proteges are performing. USA, Canada, Poland, Germany, UK and EU must be thrilled to see that the next act of the tragic comedy called Ukraine, written and masterminded by the criminals in the White House, CIA, US Congress and State Dept, is to follow.

However, I am getting sick and tired of watching how for over two years the formerly peaceful Ukraine where I grew up has been turned by these thugs and criminals into a bloodthirsty horror show. You know how they say, ‘thank god my mother isn’t alive to see this.’ My mother, originally from Ukraine, is now turning in her grave. So do many others, who would have never imagined THIS could happen to Ukrainians.

I want to know when these criminals, whether they are sitting in plush offices in Washington, Brussels, London and Berlin, or counting their ill-gotten riches in Ukraine, will be finally brought to justice? I want to know when the international tribunal will indict all those responsible for war crimes and crimes against humanity in Malorossia, Donbass and Novorossia!

I want to know when they will finally get what they deserve: life in jail. 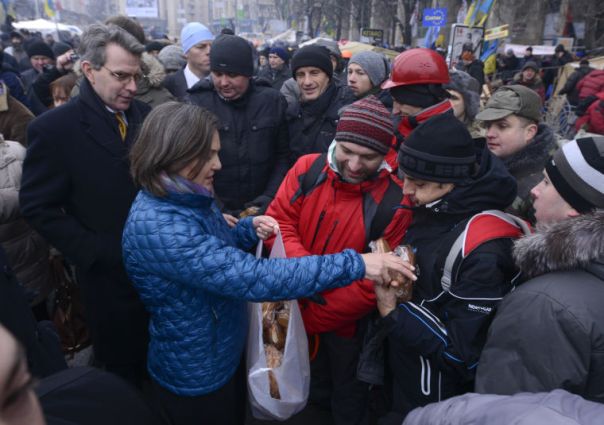