FlyDubai Boeing-737 FZ981 crashed in Rostov-on-Don killing all 62 on board (RT SPECIAL COVERAGE):

Flydubai flight FZ981 has crashed in the southern Russian city of Rostov-on-Don (Rostov Oblast) killing all 62 passengers and crew on board. The flight was en route from Dubai and crashed during its second landing approach amid poor weather conditions.

‘Every detail is important’ – interview with head of the search group. Over 800 Russian investigators, experts and search workers are now at the scene. Rostov Airport remains closed, planes have been re-routed.

First of all, I want to offer my deepest condolences to the families of all victims.

#Flydubai is a budget airline owned and operated by the United Arab Emirates state. They fly from Dubai to over 60 countries. It appears the pilot was a Greek national and the crew was international.

The plane attempted two landings, crashing on second attempt. According to the very first account of events, visibility was poor due to bad weather, which, based on some initial speculation, allegedly may have caused the plane to crash. However, a large number of questions remains.

The investigation has only just begun and as usual, Russian authorities will be very careful to admit that foul play is involved. If you recall, Russians admitted that Sinai, Egypt catastrophe, with 224 dead, was a terrorist act only after UK announced they were grounding flights to Egypt due to terrorist threat. In fact, the very first accusation floating around the net, was against the pilot and crew. They were accused of lack of professionalism; the Russian aviation in general was immediately accused of poor pilot preparation. Moreover, the company was accused of poor plane maintenance and Russian authorities in sloppiness.  All that was rebuffed by everyone from global aviation authorities to Russian authorities and various international testing agencies. It turned out that the Sinai Airbus pilot was one of the most experienced and top-rated in the business, the whole crew was exceptionally experienced and that the plane just passed full maintenance and testing in Ireland.

Clearly, Russians knew it was a terrorist act early on. The reason for the slow admission was so not to play into the hands of terrorists. One of the main goals of the Sinai terrorist act was to put a wedge between Russia and Egypt, whose close relations were on the upswing. Another goal was to take revenge on Russia for destroying ISIS infrastructure in Syria, financed and built by Qatar, Turkey and Saudis. Third, to instill dread in Russians vacationing abroad. The actual organizers of the Sinai attack have been named (in whispers) in Russia: Qatar and Qatar foreign minister in person. I explain how and why in ESR5 and ESR7.

I suspect that in the case of Rostov-on-Don Flydubai catastrophe Russians will be just as careful to publicly announce the results of investigation. We’ll see how it goes and I do not intend to get ahead of the investigation. I am for allowing professionals to handle it at their pace. Besides, very little is really known to date on how it happened and what went wrong.

Barring any real details, for now I’ll be very cautious with any definitive conclusions. But I want to share the red flags this catastrophe has risen for me. I will leave the technical stuff to specialists. Instead, let’s talk about what is my specialty: geopolitics, Ukraine, Middle East, and attempts to stop Earth Shift and Russia’s rebalancing of the world away from the West.

Let’s call this my preliminary investigation. Let’s consider it my pointing out of the suspicious alarm bells and red flags. The investigators, at a minimum, should take them into account.

For now, I hear that they are considering poor visibility and weather conditions, and/or pilot and crew error as possible reasons.

Incidentally, when the plane is this close to the ground, its speed is the slowest, which increases the possibility of survival for victims. Experts are bemused by the fact that there were no survivors.

But that’s not all. Check out this!

First, look at this CCTV footage of the plane’s crash. Notice the strange angle of descent that appears far too steep: something like 50-60 degrees. What pilot, if he is in control of his machine, would ever descent so steeply so close to the ground, risking hitting it, especially if the weather is bad and visibility poor?

Second, look at the timing of this tragedy!

On March 15th Russia just announced partial troops withdrawal from Syria (a connection with the Middle East, where UAE is also located). In connection with that, a follow up vengeance, using sloppy security at UAE airport, comes to mind.

Now look at the location of the Flydubai Boeing 737 catastrophe: Rostov-on-Don, the capital of Rostov Oblast. To the west, Rostov Oblast borders ‘Ukraine,’ as it is marked on this map:

And now check out what is actually located on the other side of the so-called ‘Ukraine’ border: Donetsk/DNR and Lugansk/LNR. Yes, Rostov oblast borders not Ukraine, but DNR and LNR. It was here, to Rostov Oblast where 2.5 million refugees from Donbass escaped Kiev bombings; many of them still reside there. Russian humanitarian convoys and other help for the republics went and continues going through Rostov Oblast. When EU delegations and humanitarian help arrives to DLNR, it also goes through Rostov Oblast. Here is another interesting little bit: ex-prez of Ukraine Yanukovich escaped from ukro-nazis to Rostov, where he presently resides.

In short, Rostov serves as a hub and a central for help to DNR/LNR. Ukro-nazis and junta followers of various colorings and creeds have been sending all kinds of threats to Rostov Oblast and its people since 2014.

This map I found on the net shows Novocherkassk, located just next to the Rostov Oblast capital Rostov-on-Don. The body of water in the lower left corner is Azov Sea. Notice distance to Donetsk and Lugansk. Also, notice Mariupol (Donetsk Oblast) just next to the border with Rostov Oblast on the Azov Sea shore, which is now in the hands of Kiev junta and ukro-nazi battalions. 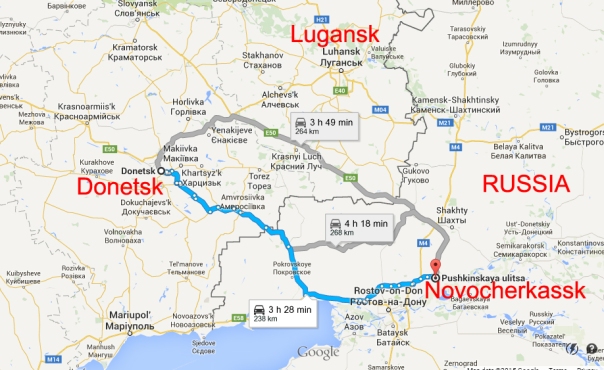 In addition to the above, Rostov Oblast on the Azov Sea is very close to Crimea, which is located just to the south-west, between Azov and Black Seas. The mega-bridge to Crimea through the Kerch Strait (Kerchensky Most) is being built just south of Rostov, in the neighboring Krasnodar Krai. 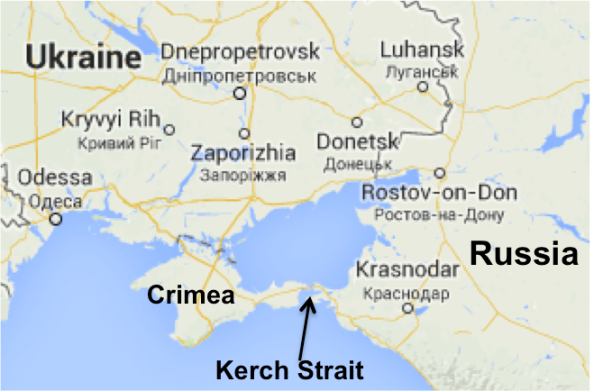 How’s all that for interesting coincidences!

Another interesting coincidence: Ukraine/Poroshenko and Turkey/Erdogan/Davutoglu are becoming very close, pushed together by their desperation and hatred of Russia and Putin. A recent investigation revealed that after Russia eliminated ISIS oil smuggling infrastructure, which made Erdogan’s family billions and allowed him to manipulate the Middle East, he is actively looking for ways to inflict damage on Russia, and is ready to accept any offers from Ukraine. Ukraine already gave plenty of advances to Turkey. I have first-hand, undeniable intel and proof of Erdogan/Poroshenko collusion and I will present it in upcoming ESR8: BLACK SEA GAMBIT. Additionally, there is direct proof of Kiev/Turkey/ISIS/Crimean Tatar Mejlis collusion, attempts and intentions to inflict damage by all means possible on Russia and Crimea. This video proof will be presented in upcoming ESR9: CRIMEAN AGENDA.

After the Egypt tragedy, Russian airports, companies and aviation crews became super-vigilant and new, most advanced security measures were adopted. I can say absolutely confidently that no bomb or suicide bomber could have penetrated on a RUSSIAN plane.

But a UAE (Middle Eastern) plane, especially if it’s a Boeing, is a different story.

Why Boeing: just look how many catastrophes happen to Boeings lately. One interesting theory I have is that the manufacturer of these planes, Boeing, may have installed malware or backdoor software, which allows to override pilot’s commands at an opportune moment. Another possibility I see is that US controlled GPS satellite feeds may get manipulated or turned off to disorient the plane.

Alternatively, plane’s internal wiring may have been tampered with by UAE airport employees. Or just plain old bomb, as seems to be the case in Sinai tragedy….

You may ask, why they waited for literally the last second to crash the plane? Why not do it en route? Wouldn’t that be more easy and secure? I think the explanation may be on the surface. Rostov Oblast played a big role in accepting Ukraine refugees, humanitarian help, as Yanukovich residence, and in certain cases, as a transfer point to Crimea and DNR by Azov Sea. And what did Russia just celebrate? The 2nd anniversary of reunification with Crimea. Plus, Russia just announced the withdrawal of troops from Syria after the mission has been accomplished.

If this indeed were a terrorist act, the point would have been to punish Russia by making sure the plane actually crashed on Russian soil; moreover, the idea would apparently be to punish specifically the people of Rostov Oblast by crashing it in plain view of all, close to the airport.

The above ‘coincidences’ potentially implicate the following entities: Kiev junta/Ukraine, Turkey, Crimean Tatar Mejlis and their friends at ISIS-Daesh, plus their Western sponsors. For what it’s worth, Ukrainians I used to know were not devious enough to execute these kinds of terror acts. Sure, they may have changed – for this lost generation all bets are off. But my money is still on Turkey, Mejlis and ISIS.

Was it just a tragic error and confluence of unfortunate events, or was it a chilling terrorist message? Let’s hope investigation will answer that soon.

Flowers brought to Rostov-on-Don terminal: https://www.youtube.com/watch?v=ps7eceBTDks and to the representative office of Rostov Oblast in Moscow.

What do Russians think – comments on YT:

By popular demand! Stay tuned for next article: 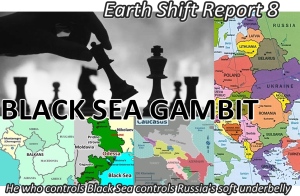 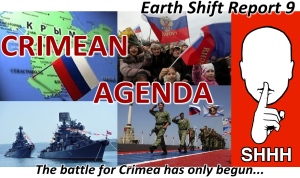