← Slippery Road to WWIII! Moldavian Deputies Try to Block US Tanks From Entering Moldova
What a treat! Renovated Kremlin reopens for tourists May 10 → 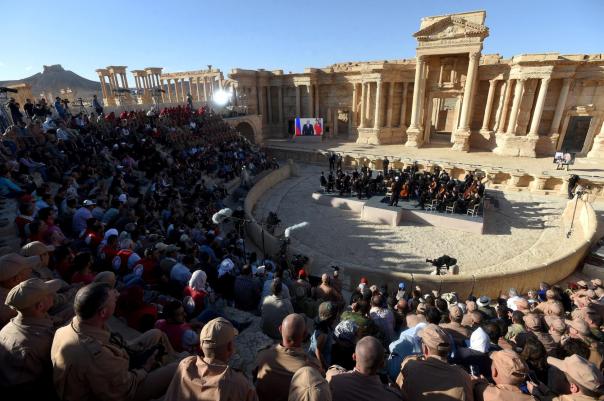 TOPSHOT – Russian conductor Valery Gergiev leads a concert in the amphitheatre of the ancient city of Palmyra on May 5, 2016. / AFP PHOTO / VASILY MAXIMOVVASILY MAXIMOV/AFP/Getty Images

@LadaTweets Was wondering your intuitive feelings on the #Palmyra event today with Russian orchestra? Very big.

This is RT video of the Palmyra concert by Gergiev orchestra:

Renowned conductor Valery Gergiev is leading a concert in the ancient Syrian city of Palmyra to support the restoration of the UNESCO site and honor victims of the war. The city of Palmyra was devastated by Islamic State terrorists who occupied the site for some 10 months before it was liberated by Syrian troops with Russian air support.

Since on FT I have the luxury of much more space to properly respond, let me do so.

Having not have the chance to listen to the concert itself yet, I can assess its impact purely based on its energy signature and resonance.

First of all, any classic concert is awesome. Classic music, especially performed on such high level, carries enormous positive, creative and peaceful energy. This kind of energy heals wounds and restores health. It promotes peace and mutual understanding.

Said in a spiritual way, it raises Chi and creates a powerful positive energy signature. Positive energy is akin to a ray of bright light, which chases away the darkness and illuminates the truth. It stimulates healing and chases away the germs/dark entities. In this case the germ is ISIS (the terrorist organization, not the ancient goddess Isis, who has nothing to do with terrorism).

Please check out my Quantum Calibrations Scale for the energy levels of Joy and High Creation. I recommend you listen to audio/videos (vid No. 2) talking about these levels. (VIDEO 1: Life-threatening & Life-diminishing Calibrations  VIDEO 2: Life-affirming & Life-creating Calibrations).

Syria has been through years of devastating war and discord, which was created by certain internal imbalances and injustices, distorted, stoked and amplified via aggressive foreign interference (US, EU, West as a whole, Saudis, Qatar, Turkey). The recent culmination of the Syria war was the liberation of a famous UNESCO World Heritage site, the ancient Palmyra, from the hands of terrorists. Palmyra, a globally protected cultural gem, suffered huge damage as a result of ISIS terrorists and Turkish smugglers destroying and looting many of its treasures.

Of course, the turnaround in Syria, the hope for peace and reconciliation became possible only after Russia and Putin made a courageous step of sending its airforce and navy. If not for Russia, the war would still be going from bad to worse. This step by Russia also forced US – the power mostly behind ISIS, Al Nusra and their regional sponsors – to abandon its bullying behavior and negotiate with Russia and Assad, something that was inconceivable just 6 months ago.

I was asked for my intuitive feeling. What I can share with you is more of claircognizant nature, aka, cosmic knowing.

This concert is a turning point. It marks and announces to the whole world that Syria is on the mend, that the healing has begun. It is a point of no return. What better place to have a concert of hope than in the ruins of this remarkable ancient city that suffered, but withstood the test of time.

Syria needs healing very badly, just like Ukraine does. Ukraine, unfortunately, has not reached its bottom yet. Syria has. After reaching the bottom, there is only one way to go – up. This miracle has just happened in Syria, announced to the whole world today through the Gergiev concert. However, this event also signals hope for Ukraine and Novorossia.

I get regularly asked to interpret through my calibrations various events, entities and countries. The past several months were full of various other priorities, and so, I wasn’t able to post on FT any of my calibrations. Let me offer you a treat: here are some fresh calibrations of this event, Syria, Russian role, and more.

Syria as a whole calibrates at this moment in time:

C: 85 – grief, suffering (due to war and devastation); Chi: 195 – striving, yearning (for peace and reconciliation)

Palmyra a few months ago, when it was in the hands of ISIS:

C: 195 – striving, yearning; Chi: 198 – same. As we see, it’s a gigantic leap from dying to the new life, while striving to return to normalcy. It’s still just below the minimum positive calibration of 200, but there is an absolute confidence that it will be soon reached, as Palmyra gets restored to former glory by Russian Hermitage and UNESCO.

The energy of the Gergiev Orchestra’s Palmyra concert itself:

C: 510 – love (Wow! Exceedingly rare, almost unheard of, for global actions and events!); Chi: 295 – neutrality, friendliness (Very positive!). If you are wondering how a military op can calibrate at the level of LOVE, it’s the same as light of truth chasing the darkness away, or a hero rescuing someone from a bully, risking his/her life to save someone he/she never met. Yes, it’s a fight, but the hero enters such fight out of love, desire to end suffering and save life. Right now the opinion of an average Syrian, and this includes normal opposition, is practically 100% approval and respect of Russia and Putin. Incidentally, true respect and appreciation that comes from the heart also calibrates at 500 – love.

Hmm… Some might ask me what Turkey, Qatar, Saudi and US calibrations are relative to Syrian conflict? What are ISIS and Al Nusra’s calibrations? I want to stay on the positive side today, so I won’t go into that. Hint: too close to death; enough so to send chills down normal people’s spine.

But today, let’s stay on the celebratory mode. Let’s treasure the gift of music and positive energy every time we can! It’s so rare and, therefore, precious…

Read all about my scale, definitions and more. I am planning on returning to calibrations in my future pieces.

Even those who don’t understand energy vibrations and quantum calibrations, know the healing properties of classic music. The fact that the concert takes place In Palmyra, with its amplifying cultural effect, sends a positive vibration through all of Syria, all of Middle East and world.

It is fitting and right that it was a Russian orchestra that performed the concert. The language of music is understood by all. The message of peace, love and cooperation, even in the face of devastation and destruction, is very clear.

← Slippery Road to WWIII! Moldavian Deputies Try to Block US Tanks From Entering Moldova
What a treat! Renovated Kremlin reopens for tourists May 10 →
Loading Comments...