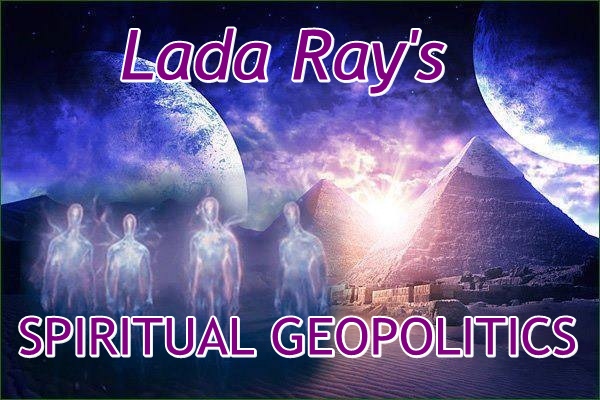 A merger between Geopolitics & Multi-Dimensional Consciousness

A misnomer or the future?

This article has been originally published on LADARAY.COM (as part of Lada Ray’s Earth Shift System)

You may have noticed that I usually talk about geopolitics from a higher consciousness perspective. One of the tenets of my EARTH SHIFT SYSTEM is what I call the Spiritual GeoPolitics. In fact, I maintain that a merger between GeoPolitics and Higher Consciousness/Spirituality must take place for humanity to survive the ongoing Earth Shift and evolve to new levels.

In our divided yin-yang 3rd dimensional reality those who are spiritually oriented tend to be scared and shy away from politics and geopolitics, as well as all things that are used as geopolitical tools, such as news and info wars, confrontation and the military. Meanwhile, those who are into politics tend to misunderstand, dismiss, and/or be terrified of things that are beyond their 3D understanding, including metaphysics and consciousness.

Both of these approaches are limiting and neither is viable in the new reality, which the ongoing Earth Shift is ushering in. Both are manifestations of severe human imbalances, denoting a sorry state of our divided and compartmentalized world.

The right way is the integral approach. I know it’s very hard. But in order to create a new reality, we must embrace our world the way it is – in all its manifestations. Denial only prolongs the agony and slows us down on the way to a better future. We must take off our rosy glasses or open our shutters, in order to see the truth (pick what applies to you!). Opening our eyes, hearts and minds to the truth of how the world is and where it’s heading is the first step in the right direction. It is not by accident that the word ‘truth’ has become one of the key words of this decade. People crave the truth and want to understand our past, present and future – beyond the obvious. People want the lies and secrecy, previously dominating the collective unconscious matrix of our planet, to be brought to light.

The good news is that more and more people are awakening to the fact that they must keep open minds and explore beyond their comfort zone. Those who genuinely want to awaken and see, experience synchronicities whereas the universe ushers into their path the wayshowers and guides, such as yours truly. These guides and wayshowers help the awakened ones orient themselves in this ever-expanding world of new ideas, realms and possibilities.

It’s also not by accident that in the past 5-10 years, the word ‘geopolitics’ has suddenly become popular and widely used. It’s a call of the times: one of the areas of human experience that we must explore, shine the light on and rectify.

So, what is the catch-all word ‘geopolitics’? Let’s use a pretty run of the mill explanation from newworldencyclopedia.org: Geopolitics attempts to explain international politics in terms of geography, based on factors such as the location, size, and resources of each area. Swedish political scientist Rudolf Kjellén coined the term “geopolitics” at the beginning of the twentieth century.’

That was the beginning of the conventional Western science of geopolitics. Subsequently, British scholar Halford Mackinder came out with his “heartland theory.” According to that geopolitical theory, ‘The World Island’ included the great land mass of Europe, Asia, and Africa, aka, the Heartland, with the stress put on the resources and land mass of Ukraine, Western Russia, and Mitteleuropa (Central Europe). The ‘Periphery’ included the Americas, British Isles, and Oceania. Mackinder’s theory can be summed up in his saying “Who rules East Europe commands the Heartland. Who rules the Heartland commands the World-Island. Who rules the World-Island commands the world.” Influenced by Mackinder’s theory, Adolf Hitler invaded Russia in 1941, which he saw as being necessary for world domination.

Disagreeing with Mackinder, other British and American scholars coined the terms ‘sea power’ vs. ‘land power.’ Under this theory, sea powers were USA and UK, while land powers were Germany, Russia (USSR) and China. A number of others were classified as hybrids. According to the sea power vs. land power branch-out, the sea powers (aka, USA and UK) will always have an advantage at sea and will, therefore, dominate the world. Influenced by this very convenient theory, throughout 20th century USA stressed the development of its Navy to control the world’s oceans and straits. Another variation of geopolitical theory that emerged during the Vietnam War was the “domino theory,” the idea that communism would seek to take over adjacent countries one by one, like a row of falling dominoes. This argument was used for U.S. intervention in Vietnam.

These are, in a nutshell, the old geopolitical theories. As we see, since its appearance, the geopolitical sound bite was used by the West to justify aggression and promote the idea of its global dominance under different names and slogans.

Despite one theory after another being proven bogus, the word GeoPolitics refused to go away. In the end of 20th-beginning of 21 centuries, there were new off-shoots of those old geopolitical theories, which now began focusing on diplomacy, how to keep the world in balance, and on preserving peace.

The reason this major breakthrough took place was two-fold:
1. On the 3D physical level: it was pure self-preservation (in my Quantum Calibrations Scale it corresponds with the level of Pride). Cold War and nuclear arms race proved that there could be no winner if a hot war between superpowers took place.
2. On the level of energy and consciousness: humanity’s consciousness had risen to the level of vibration at which reason and even humanity began peeking through (See my Quantum Calibrations Scale for more).

But it was still all happening based on the old Western geopolitical foundation.

Recently, a prominent Russian analyst and one of the authors of the KOB theory (Eng.: The Concept of Collective Security) told me that I shouldn’t use the term ‘geopolitics’ because it was invented by the West to justify its global aggression in order to keep the rest of the world down (true). He said that I should use the term global politics instead, and that geopolitics was just for dupes (untrue).

I responded that in reality the expression ‘global politics’ means approximately the same as ‘geopolitics.’ The only difference: geopolitics rolls off the tongue easier and sounds better.

Geopolitics comes from Greek and means (γῆ ge “earth, land” and πολιτική politikē “politics”). Therefore, ‘geo’ is our globe, or our Earth. ‘Politics’ refers to relations among humans and nations. In fact, if we abstract ourselves from the outdated ‘land power’ vs. ‘sea power’, ‘heartland’ and ‘domino’ theories – used by various Western powers as justification for their aggression – we get a solidly good term GeoPolitics.

I am for remembering our past because, as we know, those who forget it, don’t have a future. Why throw out a perfectly good term? Why reinvent the wheel? It’s much better to clean it up, rebalance it and infuse it with new, forward-looking meaning.

I began with re-defining GeoPolitics from a higher consciousness perspective.

Spiritual Geopolitics is defined as:

Balance is key. The yin-yang duality of our planetary existence has become catastrophically imbalanced, and it has to be brought back into a state of equilibrium.

From a spiritual perspective, geopolitics is the shadow side of the collective human experience on our planet. Shadows are as important as light, if used correctly. The thing we have to fear is not the presence of the shadows, but an imbalance of too much shadow and distortion of truth.

Geopolitics is the way large groups of humanity, residing in different geographic locales, with different languages, interests, aspirations and levels of development, have learned to interact with each other. So far, we have no other such mechanism.

Geopolitics is a 3rd-4th dimensional creation. As such, it is an imperfect construct, if looked at from a higher consciousness perspective. But it is a construct produced by the collective consciousness of humans. As such, it corresponds with the present day energy and vibration of humanity as a whole.

Just like anything else, GeoPolitics is a mere tool and it’s up to humans to use it for good or evil. Like any tool, GeoPolitics has to be cleaned and kept in good order, to be functional. Yet, here’s what happened in the past 30 or so years: as the global human society became more and more imbalanced towards the yang West, so did geopolitics. Today we are experiencing Earth Shift, which manifests in GeoPolitics as follows:
1. Along with Russia The Great Balancer working hard on rebalancing the world, GeoPolitics also undergoes major cleansing and re-thinking.
2. But there are still lots of shadows and skeletons hiding in various crevices of the old geopolitics, which need to be dragged out of those shadows and exposed to light.

My mission is to:

1. Shine the rays of truth into these shadows, exposing them to light.

2. Assist the Earth Shift and co-create new planetary reality. One of my goals is to perfect and re-think GeoPolitics to correspond with new consciousness.