We are continuing the Ukraine topic.

Dear Lada, I have been following the developments in Ukraine of the past few days, and the preparations for what some dubbed as Maidan 3. I still read signals that “volunteers” are being bussed to Kiev. I agree with you that the traditional West-sponsored colour revolt is not possible, but that does not preclude the “spiders in the jar” scenario, and that the extremists like Avakov would not go for Poroshenko’s throat. Poroshenko may buy off some of the forces, but the armed thugs are very diverse, reporting to various strongmen, and some voiced their discontent with Poroshenko quite vocally. As there are several forces that would like to take the proverbial crown off Poroshenko’s head, it maybe so that they are balancing each other out for now, measuring each other up… In any case, I have a feeling that something worse, than a Maidan is afoot.
What I wonder is, if there are any plans to secure the nuclear power plants in the worst-case scenario. If something (even more) disastrous started to happen in Ukraine, then Russia could have pushed for a UN-mandated peacekeeper/military policing international mission. With Vitaly Churkin gone, that venue may have been weakened. 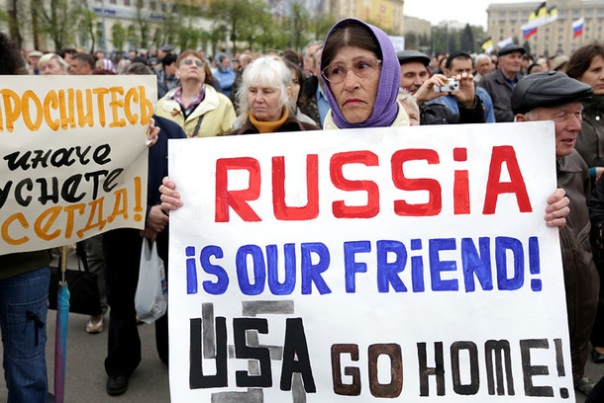 Yes, the UN venue has been weakened. The new Russia’s UN envoy is, well… new. We’ll see how he performs – he may surprise us. For the time being Russia will have to make better use of other venues, others picking up the slack. Such as: Lavrov personally will have to engage more to navigate the global situation in manual regime. Incidentally, he has been doing it a lot lately. Just look at his appearance at the Munich Security Conference, as one example.

That said, the Ukraine Shift will be aided by the fact that the West is slowly disengaging from Ukraine, due to the US and EU domestic problems, and due to three years of hard diplomatic work by Putin, Lavrov, Churkin, and others.

Paradoxically, the worst case scenario: ukro-nazis seizing power in Kiev, would be the best and more expedient outcome. Should that occur, it would quickly demonstrate to the whole world how rotten the Kiev regime really is and what the Euro-Maidan was really about. The West would be forced to change its stance to save face and to somehow rectify the bad situation next to the EU borders. This would accelerate the awakening SHIFT timeline and free faster all those poor people still stuck under Kiev regime.

It would also likely make Ukraine citizens rise against the regime sooner.

But that’s exactly why this scenario won’t happen: the West won’t allow it because having a slowly and painfully festering thorn of anti-Russian Ukraine is a lot more valuable to both US and EU. That weakens Russia and the whole Russian World for as long as the wound cannot start healing. This also diverts much energy and resources to deal with the difficult situation next door.

No matter what Trump says, the idea of controlling Russia through Ukraine’s wound is much too attractive to just let it go. Therefore, I am rather skeptical about Trump moving much in the right direction voluntarily.

But – AND THAT’S IMPORTANT – what will ultimately force the West as a whole to loosen its grip on Ukraine are the actions of Russia, as well as people like you and me, Nemo: those who speak the truth and enlighten others as to the real state of affairs.

Another reason that Maidan 3.0 or any variation thereof, including the ousting of Poroshenko without elections, won’t happen is because the West already recognized the 2014 illegal coup, legitimizing illegal elections held by the junta, which installed Poroshenko. Another coup and another installed ‘president’ will completely delegitimize the entire Euro-Maidan and the whole junta structure they’ve built.

As a side note: Some are pushing for early Rada and presidential elections – and this could allow for a different outcome. Early elections for the West may be another way to re-structure and re-legitimize the junta under a different guise, with different faces, such as Yulia Timoshenko. That’s where Russia may come in and prevent this scenario, because all it will do is prolong the agony of Ukraine. Neither Russia nor DLPR benefit at all from changing the face of the junta.

This is precisely why Poroshenko is still being kept in power. Very badly, with huge problems, this slippery SOB still manages to maintain a very delicate equilibrium between all those home-grown crazies. Anyone else, such as Avakov, would not manage.

This is the only thing all Great Powers agree on: no one wants even deeper destabilization of Ukraine; no one wants a full fledged fascist state on their borders with raging civil war all over the country.

That’s why Poroshenko is still convenient for the time being even for Russia – sort of like the best of the worst and a known quantity.

Besides, Poroshenko makes for such a convenient scapegoat. Everyone’s just waiting for the mousetrap to close. Then Poroshenko and his cronies can be tried for their crimes. The trick will be not letting them escape.

You don’t want another face, such as Timoshenko or Avakov, or anyone else. After all, that other person could claim she/he had nothing to do with the war crimes, or that they were following orders. Meanwhile Poroshenko would have time to conveniently escape, having received asylum in London, US or Canada.

This has to be played cool and lots of negotiations will take place between Putin / Lavrov /Shoigu (whose special brand of diplomacy in Syria has proven very effective) and their Western counterparts.

Also, Russia is awaiting the European elections and subsequent Shift this year and next. But that’s a big and separate topic.

PREDICTION: There is no turning back after 2018. That will be a pivotal year, along with 2019.

The takeover of nuclear stations. Frankly, I don’t think ukro-nazi battalions have the guts, nor smarts, to accomplish that. Remember what I said in previous article Energy catastrophe and shut-down of Ukraine? They are mostly imbecile delinquents with an IQ below 100. They can only do what they are doing because the West has financed, armed and encouraged them.

That’s assuming they actually are acting of their own will, which they are not, as I also pointed out in the article. These ‘Ukraine patriots’ don’t make a move without being paid. Whoever pays, orders the music, as we say.

Avakov is not his own man either. He is Kolomoysky’s agent. Kolomoysky has all his billions in the West, which he salvaged by robbing and practically bankrupting Ukraine’s banking system. Everyone is well aware that he stole from the state, and – oh crime of crimes! – he also stole $10 billion of IMF loan money allocated to Ukraine. However, it wasn’t just his bounty: this money was divided between him, Poroshenko, Yatsenyuk, Groysman, Avakov and a few others.

Although everyone appears to know this both in Ukraine and abroad, no one’s going after Kolomoysky’s money. Why? Because he made a trade with UK/US: his money for his country. Whatever Kolomoysky does is all done to preserve his money. Basically, like Berezovsky in his day, Kolomoysky is a typical agent of the West.

Yulia Timoshenko is trying to sell herself to the highest bidder; she’s now pursuing Trump to convince him to install her instead of Poroshenko. Nalivaichenko is CIA asset; oligarch Pinchuk was the largest private foreign donor to Hillary campaign, and now he is kissing up to Trump; Klichko is Merkel’s protegé, and so on.

I did discuss many of these personas and who controls them in ESR2 and ESR3.

Therefore, combined with Russia’s international efforts, and the fact that EU is mortified to have another Chernobyl, a new nuclear catastrophe in Ukraine will be avoided. Russia also still retains some deep-cover assets in Ukraine, who can prevent the nuclear worst case scenario to save lives. Besides, if ukro-nazis did dare take over nuclear stations, that would be the end of them, as enough people would finally rise against them. This is why Western masters won’t allow it to happen.

I am a lot more concerned that this wound will continue festering another 2 years as the West does everything to sabotage the Ukraine crisis resolution. I feel very sorry for the people of Novorossia (DLPR, Odessa, Kharkov, Dnepropetrovsk, Zaporozhie, Nikolaev, Kherson, not to mention the occupied parts of Donbass), who have to continue suffering.

But here is a bit of very good news: Russia recognized DPR/LPR passports. This is a great first step towards a major shift in all of Ukraine.

The next step must become introducing visa regime for Ukraine. This will squeeze out millions of Western and Central Ukraine guest workers, who will go back to Kiev and put pressure on the regime. Once this is done, the situation in Ukraine will begin changing quickly. This could happen later this year.

The problem is, as always, the pressure on Russia by the West. Overall, it’ll be moving towards resolution, albeit gradually.

WILL POROSHENKO BEGIN A NEW WAR IN DONBASS? HOW WILL PUTIN, TRUMP REACT?

GET EARTH SHIFT REPORTS ON UKRAINE!