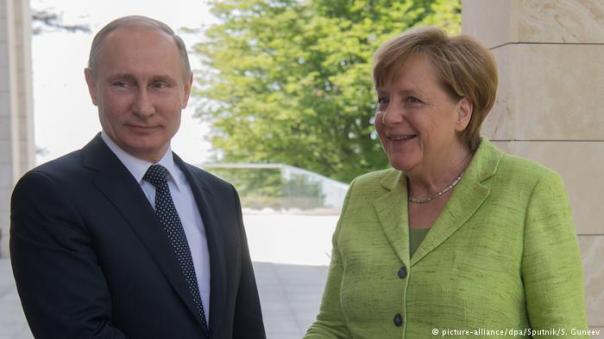 On May 2 Putin had a phone conversation with Donald Trump, during which the two agreed to meet soon, probably during the approaching German G20 Summit. On May 3, 2017 Putin has met with Turkish president Erdogan. Clearly these two events are tied with Merkel’s visit. Trump and Putin meeting in Germany means the host needs to check in with both. In addition to the EU and German needs, Merkel seems to have assumed the temporary role of a liaison between Russia and US. Meanwhile Erdogan’s visit has a clear Russian gas pipeline / Turkish Stream underpinning, which is also tied to Syria. Erdogan’s message is (as I long predicted): Turkey’s direction is to distance itself from the US and EU and get closer to Russia.

On May 2, German Chancellor Angela Merkel has visited Sochi to meet with Vladimir Putin. The date was agreed upon two months prior, after Merkel’s persistent requests. Curiously, Putin found no day in his busy schedule other than May 2…

1. To compare notes on Ukraine and Minsk-2 negotiations, which – predictably – came to a standstill due to Kiev junta’s violations.

2. To make sure the construction of the crucial Nord Stream 2 was on track and to check with Putin how it could be pushed through before it’s too late.

Incidentally, Nord Stream 2 is a competing project with Turkish Stream. Both Germany and Turkey are in a competition who will get to build the pipe faster and who will get to transport more Russian gas.

3. To try scoring some political points before German elections, by showing German MSM present at the Putin-Merkel presser how tough she is on ‘bad’ Russia.

THE CURIOUS CHOICE OF THE DATE

It’s safe to say that Putin deliberately chose May 2. What’s so special about this particular date? Two things:

1. On May 2, 1945 Soviet troops took over Berlin, installing that famous Red Victory Banner over the defeated Reichstag, and officially ending WWII. It would take a few more days to draft the capitulation agreement, which would be signed on May 8 German time and on May 9 Russian time.

2. On May 2, 2014 ukro-nazi fascists, supported by Germany, US and EU, burned dozens (by some accounts, hundreds) of people alive on Odessa’s Kulikovo Polie. The only crime of these peaceful protesters was that they disagreed with the ukro-nazi Kiev regime and wanted to speak their native Russian language.

For the most part, negotiations were conducted behind closed doors. But the public part is very telling indeed.

As to Minsk-2, there was a surprising unity between Putin and Merkel, to a huge disappointment of Kiev. Minsk-2 has to be observed. There won’t be re-negotiation of the original terms, and contrary to Kiev’s continued hopes, there won’t be a new agreement.

Nord Stream 2 is another sticky point. Kiev junta, as well as its ‘friends’ – most notably Poland and the Baltics – keep hoping that Nord Stream 2 won’t be built. The construction of the second branch of the Russian gas pipeline to Germany will render obsolete the old Soviet pipeline through Ukraine.

The Ukraine pipeline is presently used for the transit of a significant amount of Russian gas to Europe, although the amount of transit diminishes every year as more gas gets rerouted. To this day, Russian gas transit is the biggest foreign revenue source for Ukraine.

Gazprom has long announced that after the current gas transit agreement expires in 2019, Russia won’t renew it. This effectively means the following:

Hence the German effort to ensure Nord Stream 2 is on track. German parliament has recently approved Nord Stream 2 speedy construction. The new 6.6 bln euros in loans have been allocated to the project.

During Sochi visit Merkel confirmed that Germany is fully on board regarding Nord Stream 2 by hinting that EU regulations would slow down the construction and that they should not apply to this pipeline.

Based on the above, you’d think that Putin and Merkel were the best of pals. Putin confirmed that Germany was Russia’s leading trade partner No. 2, after China. Putin also said that the trade volume between Russia and Germany grew by 43% since last year.

Merkel piped in by saying that there are differences, but dialogue is the only way to understand each other’s position.

Where did all the talk about punishing and isolating Russia go? Where are those anti-Russian sanctions? As I predicted since 2014, ‘They’ll huff and puff for a couple of years, and then everything will get back to normal – just like it happened after 2008 Georgia – S.Ossetia war.’ I also said that the appearance of the sanctions will stay, while in reality business and trade will go on, bypassing them.

Predictions on track: 2 years after 2014, Russian trade with Germany is suddenly up by 43%. Let’s also recall that Saakashvili of Georgia was out of his presidency 2 years after he attacked S.Ossetia, and that Abkhazia and S.Ossetia would never return to Georgia. Ukraine is following closely in Georgia’s tracks.

The political part of the meeting had an entirely different tone. Merkel dragged (excuse me, brought) with her to Sochi an entire entourage of ‘journalists’ representing German MSM. The questions they asked during joint presser can only be characterised as aggressive in their ignorance and dumbness – just confirming a sorry state of the Western MSM. Listen to the questions and Putin and Merkel answers on video above.

Question from a German journalist, ‘Why did Russia interfere in US elections and is Merkel afraid of Russian interference in German election?’

Putin’s exceedingly patient and diplomatic reply: Russia never interfered in other countries’ internal affairs. The opposite is true for the West: it constantly interferes in Russian affairs. Further, Putin explained that allegations of Russian interference in the US elections have never been confirmed; it was just a rumor spread for USA’s internal political reasons; therefore, the German journalist’s assumption of Russia’s interference in German elections is based on a rumor.

Another German MSM representative called the Donbass people ‘separatists,’ to which Putin replied that the civil war and Donbass catastrophe are consequences of an illegal coup and illegal power garb in Kiev. It was Kiev that attacked the people of Donbass, forcing them to defend themselves. Putin also expressed his hope that German MSM would not twist his words and that it will have anough common dicency to publish his answer.

Merkel replied that Germany considers the Kiev authorities to be ‘legal and democratically elected.’

Merkel has made more embarrassing remarks. She implored Putin to ‘look into the reported violations of the rights of minorities,’ namely, gays in Chechnya and Jehovah’s Witnesses.

Then she decided to lecture Putin on human rights. Per Frau Merkel, Russian authorities were not as gentle and nice to protesters as they should’ve been.

Putin did the absolutely correct thing by diplomatically reminding Merkel that the Russian law enforcement are gentlemen of the highest caliber compared to their Western counterparts. PUTIN: “In Europe they have no qualms about indiscriminate use of tear gas, water cannons and batons to disperse demonstrators.”

GO TO ALL EARTH SHIFT REPORTS

P.S. There is one more important reason May 2 was chosen for Merkel’s visit. On May 2 people in Odessa and all over the world commemorated the 3rd anniversary of the Odessa tragedy. Per reports, ahead of May 2 Poroshenko was in a frantic state, admonishing his law enforcement to make absolutely sure no ukro-nazis attack citizens attending the commemorative events. Such attacks are a regular occurrence in today’s Ukraine.

Let me reveal to you what went on behind the scenes: Poroshenko and Kiev were warned by Germany to make sure nothing happens that could look bad for Merkel during her Russian visit. Any violence against peacefully mourning citizens would confirm that Kiev junta is a terrorist regime. If any provocation took place in Odessa, Putin would have a terrific opportunity to rub Merkel’s nose in it.

Therefore, by choosing May 2, Putin allowed the people of Odessa to mourn and commemorate their friends and family in peace.

May 2, 2016 Odessa Report: Under Foreign and Nazi Occupation

MOLDOVA and ODESSA: Hundreds of Thousands Come Out for May 9 #Victory70 Celebrations Despite Attempts to Ban Holiday