← What next? US shuts down Russian San Francisco Consulate + two other diplomatic sites
Journalist fired for exposing how CIA ran weapons to terrorists →

EARTH SHIFT WEBINAR 1: WILL TRUMP SURVIVE HIS FIRST TERM? is on Fall-Winter 2017 Holiday Sale starting today! Now only $30 (reg. $56). A number of predictions made in that webinar in January – early February 2017 have already come true & more continue coming true! Must listen!

This post is a follow-up to my yesterday’s article: What next? US shuts down Russian San Francisco Consulate + two other diplomatic sites!

We have seen how it went in Ukraine since 2014 Kiev fascist coup: banning Russian films and newspapers, expelling Russian people, attacking Russian consulates and embassy, beating up those who disagree, and blaming Russia for their own sins…

US is quickly digressing into the same dark state. But it is one thing when it’s Ukraine, a large country, but with destroyed economy, no modern army or weapons to speak of — and a completely different story when we are talking the monstrosity super-power such as the US (or as one US politician recently called it: ‘hyper-power’). Unlimited financial and military power, nukes, yet no brains and no sense to speak off. Nukes and all that might in the hands of 5-year-old imbeciles — my sincere apologies to 5-year-olds and imbeciles for such comparison.

If anyone hasn’t experienced the chills yet — you should…

This is Period 8 on steroids. This is a death throes hysterics of the empire experiencing the Inverted Collapse, yet not getting what has hit it. And to top it off, those who want to preserve old status quo, however rotten it is, will do everything on every level to prevent Russia the Great Balancer from facilitating the Earth Shift.  This is what’s happening, in a nutshell.

The problem for such entities is, there is no stopping the Earth Shift; it’ll continue no matter what they do.

This is a witch hunt. But as you’ll see below, this also resembles a mega-heist or highway robbery, when valuable Russian properties and valuable objects in Russian diplomatic possession are simply confiscated by the US.

I have the strangest sense of deja vu. I read about it before… I’ve seen it in films… and in part even witnessed the consequences with my own eyes. Using the pretext of the Russian 1917 Revolution, right after Lenin came to power, practically every country of the West stole Russian properties belonging to the state, church, various organizations and private citizens. Russian properties everywhere were looted and untold art and historic valuables were taken. They all ended up in the West, in private and state collections, many hidden for fear of being discovered and demanded back. Most of the properties and valuables were never returned to Russia, although some began returning after Putin came to power. Oftentimes Russians had to pay astronomical sums to get back what was their rightful property and ancestral right.

What does this tell us? Exactly what I told you all in my 3 WEBINAR SERIES. In each webinar of the series I explained why all this ‘commie’ scare was total BS, orchestrated and fed with mother’s milk to the sheeple in the West so they wouldn’t know the truth. And the truth was that the West grabbed much more power and riches than it had the right to. The West wanted to hold on to its ill-gotten power at all cost, and to do that, it had to keep the only country that had the know-how and ability to rebalance the world, in other words, Russia the Great Balancer, as weak, isolated and disjointed as possible.

Want proof? Here it is, right in front of your eyes, if you have them. There is no ‘commies’ in Russia any more and in the past 25-30 years Russia tried in every way possible to indulge and cooperate with the West, in the process almost giving away the farm. Yet, the outcome is always the same: the West for centuries has, and continues trying to subdue, weaken, and destroy Russia. Believe it or not, in 18th and 19th centuries Russia’s great minds were talking about the very same problem: the West trying to malign and subdue Russia. Absolutely nothing has changed since. (And believe it or not, there were no ‘commies’ in Russia in 18th and 19th centuries either.)

© Justin Sullivan / Getty Images
Russia’s foreign ministry has said US security services intend to conduct searches in the building of the Russian consulate in San Francisco on September 2.

“Alongside the yet another raid on expensive objects of Russian state property, which [the US] have blocked and are now persistently offering us to put on sale, this time the orders of the US authorities pose a direct threat to security of Russian citizens” in the US, the ministry spokeswoman Maria Zakharova said in a statement. 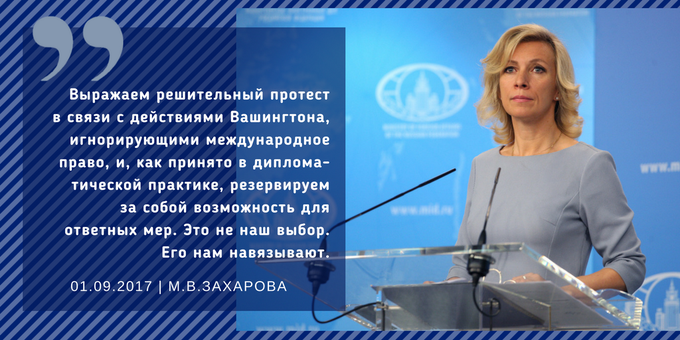 The searches will not only be carried out at Russia’s consulate offices, but also at the apartments of staff who live in the building and who have immunity, she said. To perform those searches, US authorities have ordered those staff members and their families, including children and babies, to leave their homes for up to 12 hours.

US performs ‘individual breakdance’ instead of paired tango – Lavrov

“We are talking about an invasion in the consulate office and homes of diplomatic staff, who themselves are being ousted not to disturb FBI agents,” Zakharova stated.

She pointed out that Moscow was given just two days to close one of its largest consulates which serves the needs of “several densely populated states.” Washington’s actions seriously violate international norms, including the US’ obligations in the Vienna declarations on diplomatic and consulate relations.

Adding that the latest US decision “even exceeds” Obama’s move to expel Russian diplomats and confiscate Russian diplomatic property in December 2016, Zakharova said Washington’s actions only further exacerbate the already uneasy atmosphere hanging over the bilateral relations of the two countries.

A series of diplomatic ‘tit-for-tat’ steps since Barack Obama’s expulsion of Russian staff last year has severely strained relations between Russia and US. In its latest move, citing a “spirit of…

Tens of thousands of people “who are far from politics” will suffer from Washington’s measures in both countries, Zakharova warned. While the US has previously stopped issuing visas to Russian citizens in US consulates in several major Russian cities, they are now preventing Americans from getting Russian visas in San Francisco.

“It is obvious that the US is not interested in the development of relations between people,” Zakharova said.

Read yesterday’s article: What next? US shuts down Russian San Francisco Consulate + two other diplomatic sites

ADDED 9/2/17: BY INTERNATIONAL LAW US ACTIONS CONSTITUTE AN INVASION OF RUSSIAN TERRITORY!

US threatened to break down the door into Russian diplomatic mission in the absence of Russian officials there. Also US advised that they plan to search Russian trade mission in Washington DC. The threat to search Russian San Fran consulate was issued as the plane carrying new Russian ambassador to the US was about to land in Washington. Clear provocation and clear disregard for any international laws. According to international law US has no jurisdiction inside Russian embassy and consulates, therefore, this is construed as an invasion.

It is clear to me that US will continue escalating the situation, in an attempt to sabotage Russian presidential elections in March 2018, the preparation to which has already begun. The main goal is to try to distract Putin, as well as try to present him as a weak leader.

***WARNING! What is happening with Russian diplomatic properties is not a distraction, as some suggest  — it is THE goal. Why? I’ll try to break id down in a few days for you, when time permits. Stay tuned!

GO TO LADARAY.COM FOR MUCH MORE

← What next? US shuts down Russian San Francisco Consulate + two other diplomatic sites
Journalist fired for exposing how CIA ran weapons to terrorists →
Loading Comments...