This is the first full LIVE video – just video, no commentary, from Zvezda, the channel of the Russian Army. I’ll see if I can post the parade only with commentary, when it shows up.

What’s on this video + a bit of my commentary and impressions!

First 19+ minutes – arrivals of foreign heads of state and Putin greeting them. With spectacular views of the Kremlin and Moscow.

In between they also show the behind the scenes Kremlin, with waiting/toasting heads of state.

@25:30 Putin and heads of delegations on foot head to Red Square

Next, foreign regiments participating. Nice uniforms. Just look at that Chinese contingent, so flawless like they are jointless! How do they do it? And a very unusual performance by the Indian contingent.

The contemporary Russian Army troops and tech – amazing as usual.

My impression: the parade is more laid back than usual. No pressure associated with May 9, more casual than it would be on actual Victory Day.

Brief but touching overview from RT hosts – watch what the girl says: her grandmother was a part of the female company that fought side by side with the Soviet Red Army to liberate Belarus, and she was Polish. There were decent Poles too…

After the parade, Putin and heads of foreign states lay wreaths to the Tomb of the Unknown Soldier.

Also read: Vladimir Putin Shocks the West! The Munich Betrayal and The Real Lessons of the 75th Anniversary of World War II (Putin’s Article in The National Interest Magazine, USA)

A full list of Victory75 Marathon posts is under this article!

The 75th WWII Victory anniversary concert was held in the evening of June 24 in a highly unusual setting, on Mamayev Kurgan, Volgograd – former Stalingrad. This is an incredible by its impact memorial complex, dedicated to heroes of the battle of Stalingrad.

“To Heroes of the Battle of Stalingrad” at Mamayev Kurgan

Mamayev Kurgan is a dominant height overlooking the city of Volgograd in Southern Russia. The name in Russian means “tumulus of Mamai”. The formation is dominated by a memorial complex commemorating the Battle of Stalingrad. Wikipedia

Mother Russia Calls, Mamayev Kurgan’s dominant monument – world’s one of a kind. And yes, this giant statue is carved out of stone, as is the entire complex: 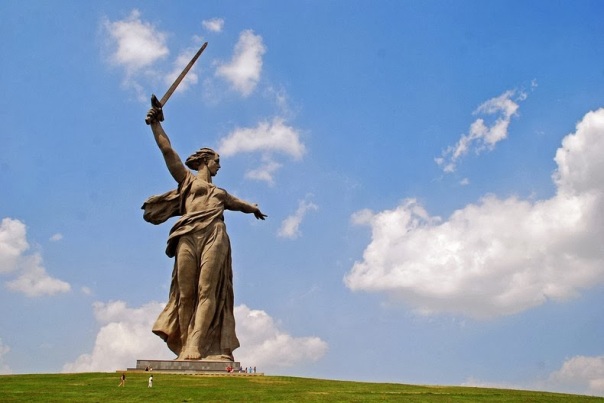 Other monuments on Mamayev Kurgan:

The main concert of the 75th anniversary of the end of WWII has been held with this spectacular backdrop!

I’ll share it here, on FT when it is released.

Vladimir Putin Shocks the West: The Munich Betrayal and The Real Lessons of the 75th Anniversary of World War II!

Is Putin Trying to Pull a Yalta 2.0 or Reform the UN before the Inverted Collapse of the West? New Analysis & Predictions!

If Your Motherland Was Invaded, Would You Fight/Kill? The Real Reason Russians Defend Their Country! Why Russians Always Win!