To go with ESW6: THE PUTIN ENIGMA AND ESW1: WILL TRUMP SURVIVE HIS FIRST TERM & my many predictions.

From Inessa S: At the 2017 APEC Summit, held between 10 – 11 November in Vietnam, a bilateral meeting between Presidents Putin and Trump was supposed to take place. Russia’s Press Secretary, Dmitry Peskov, stated that “while both sides were trying to organise the meeting, the United States offered a time and place that only suited them.” “The only time proposed was that which suited the Americans, and they offered only one place – a room that was rented by the Americans,” he said. Peskov reiterated that the last meeting of the Presidents, at the G20 in Hamburg, was held on American diplomatic territory, and, by diplomatic protocol, this time the meeting was supposed to take place on Russian diplomatic territory. “The Americans showed no flexibility, and unfortunately no other alternative offers were provided, so the meeting could not take place,” Putin’s press secretary added. Nevertheless, the leaders of the two countries had a number of informal talks on the sidelines of the APEC summit, and whoever was responsible for the non-meeting, “would be punished” – Putin said in jest. Donald Trump similarly voiced a positive association with Russia, albeit he said that he trusted American intelligence services in the investigation of “Russian interference” in the presidential elections in the United States. This differs from what he said earlier – when asked by journalists if he believes the Russian president, Trump replied: “Every time we see each other, he says, “I didn’t do it. “And I believe that, I really believe that if he tells me this, then he hasn’t. I think he’s very offended by this, if you want to know the truth.” It must be remembered that the concept of the “deep state” is very real in the US – and Trump has to play to both sides, that is the intelligence community, and the American public. Reading between the lines, he at least made it clear that no “17 agencies” existed that manufactured “the Russian dossier”, that the US mainstream media propagated wildly. 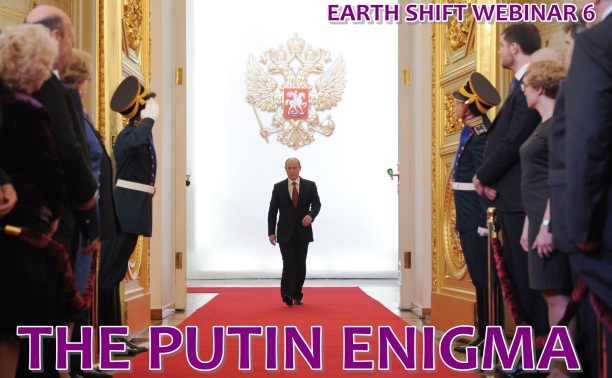 Apply for discounts and scholarships: THE PUTIN ENIGMA 30% OFF for Monthly Contributors! New International Scholarships for EARTH SHIFT WEBINARS 4 and 6!

Latest from Beijing: On the sidelines of the 2014 APEC Summit in Beijing, Russian President Vladimir Putin and Chinese Premier Xi Jinping have signed 17 economic cooperation agreements, including the new gas supply framework agreement. In addition, on Monday Putin will meet privately with heads of Indonesia, Malaysia and Japan.

The framework of the new mega-deal being signed between Russia and China seals Russia’s resolute Asia pivot, as I have predicted since the beginning of the Ukraine crisis. In addition to the Eastern Route pipeline running through Vladivostok and servicing Eastern Siberian and the Far East deposits, the new ‘Western Route’ pipeline running through the Altai Mountain range will now send Russian gas to China from Western Siberia as well.

This new deal will allow Russia to sell an additional 30 billion cubic meters (bcm) of gas to China for 30 years. This is the next leg in the multi-prong multi-year strategic partnership program between Russia and China.

The first in this massive strategic initiative was the 30-year mega-deal signed by Gazprom in May to supply 38 bcm a year to China using Eastern Siberia/Far East gas deposits. The Eastern Route pipeline is already being built through Mongolia, which stands to gain generous transit fees, thus becoming an important strategic partner for both Russia and China. For more on this see my article from 9/4/14: Predictions Coming True! Russia Pivots to Asia: Putin goes to Mongolia and Opens Power of Siberia Pipeline to China.

Subsequent steps were the recent energy, trade and finance agreements between Russia and China, signed one month ago. These agreements included a currency swap worth 150 billion yuan ($25 billion) intended partly to reduce the influence of the US dollar.

The new Western Route deal will double the volume of Russian gas going to China. This will make China Russia’s No.1 customer, surpassing the EU.

Since February-March 2014, in my articles, YT videos and interviews, as well is in my predictions, I had been saying the following:

1. Russia is the ultimate planetary balancer. When there is an imbalance, as we presently see happening with the West, Russia will rebalance the status quo.

2.  ‘If Russians feel even slightly inconvenienced by Western sanctions – off to the East they go.’ Russia’s pivot to the East is now shaping up.

3. I also predicted that in several years time Europe will start experiencing serious gas shortages as Russian gas gets diverted to China. And they will have absolutely no one but themselves to blame. 25 years after the fall of the Berlin Wall, the solution for Europe is to break down the new wall US, with Poland’s and Baltics’ help, is so diligently building between Europe and Russia.

4. I also warned that the USA’s goal is to drive a wedge between Russia and Europe to prevent their growing cooperation. At the same time, the goal is also to weaken Russia as its main geopolitical competitor, and to weaken Europe as its main know-how economic competitor.

Wake up, Europeans! It’s up to you to pivot towards the future, not the past!

There is much more in Predictions, Interviews and LadaRayLive on YT, as well as various articles on this site.