From the English language site of EEC: EurasianCommission.org

“Armenia is now in the Eurasian Economic Union”

By this Treaty Armenia has become a part of the Treaty on the Eurasian Economic Union, signed by the Presidents of the EAEU Member-States – Alexander Lukashenko, Nursultan Nazarbayev and Vladimir Putin on May 29, 2014 in Astana, as well as other international treaties forming the EAEU legal framework. From now on, Armenia undertakes corresponding obligations, and therewith gets access to the EAEU single market with 170 million citizens.

By joining the Eurasian Economic Union, the state gets fully involved into implementation of the Eurasian project aimed, on the one hand, at forming of four freedoms: free movement of goods, services, capital and labour force. On the other hand, – at creation of one of the key economic centers of evolving architecture of the multipolar world.

The fourth partner expects a number of positive effects form integration. Among the key ones there are an  increase of goods turnover due to elimination of barriers and minimization of administrative expenses,an increase of mobility of labour force due to introduction to the single labour market, an increase of stability of economic development due to reduction of economic isolation effect, development of infrastructure projects, participation in drawing up of the agenda using the mechanisms of the Eurasian Economic Union.

Lada’s notes: As of June 11, 2016, EAEU has 5 full members: following Armenia, Kyrgyzstan joined EAEU in May 2015. Tajikistan is next in line.
Maps of EAEU & membership info are included in ESR9: Attack on Kazakhstan: Who Destabilizes Eurasian Union?

Between 2014 and 2016 there were 4 very serious attempts to ignite color revolution, instigate regime change and put a rift between Armenia & Russia/EAEU.
Remember: the mega-goal, the primary target and the biggest prize is ALWAYS RUSSIA!
US cannot allow the very possibility of a multipolar world!

So, on January 2, 2015 Armenia officially became a member of Eurasian Economic Union (EAEU). Before that happened and ever since, there have been relentless attempts to destabilize Armenia by all means possible.

I have been warning about it since 2014.
Following a successful subversion of Ukraine by the US, all post-Soviet space leaders, as well as many other heads of state ,have been on high alert, knowing they could easily be next, and their country could be plunged into chaos and bloody war just as easily.

Armenia, due to its isolated and vulnerable geographic position, weak leadership and poor economic situation was the primary target. Since then, four very serious attempts to introduce color revolution, war and chaos were made in Armenia.

1. A false flag ‘killing by a Russian soldier’ from the nearby military base of an Armenian family: needed to compel Armenia to boot out the Russian base – the only protection Armenia has against Turkey, its eternal enemy.

2. The so-called “Electric Maidan,” during which electric rates hikes were blamed on Russians (who else?), and where Ukrainian nationalists tried to infiltrate protests.

4. The latest: April 2016 4-day Nagorno-Karabakh war between Armenia and Azerbaijan – quelled almost immediately due to Sergey Lavrov and Russia’s prompt peacemaking efforts, resulting in renewed truce. This attempt aimed at destabilizing both Armenia and Azerbaijan, and at creating an additional rift between Russia and Armenia. Further, it was designed to push Azerbaijan away from Russia and closer to Turkey and radical Islamism.

And what an interesting coincidence! The Nagorno-Karabakh conflict escalation happened DURING the visit of both heads of Armenia and Azerbaijan to the USA, where they attended Nuclear Summit hosted by Barack Obama!

Incidentally, did you know that 160,000 Armenians reside in Los Angeles, USA (the largest Armenian enclave in North America) and that George Clooney is Armenian? 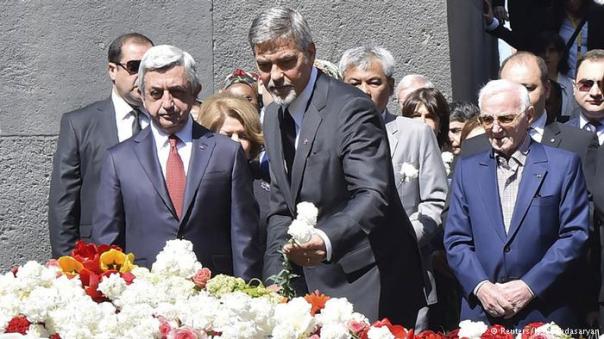 To find out how Russia, Putin and Lavrov successfully dealt with Armenia, Karabakh and Azerbaijan problems and how the volatile situations were reversed, listen to Lada Ray’s full Earth Shift Report!

Donate and watch/read this comprehensive report!

Go to ALL EARTH SHIFT REPORTS