What is the Truth about 1917 Bolshevik Revolution? Striking Festival of Light in St. Petersburg

The Festival of light on November 4-5, 2017 is dedicated to the Day of the National Unity and the centennial of the Russian Revolution. It’s hosted by the Winter Palace / Hermitage on Palace Square, and by the legendary revolutionary battleship Aurora, which is now a museum. This very cool Festival of Light relives the events of the 1917, and the centennial after.

The Festival of Light on Palace Square – Winter Palace

The Festival of Light over battleship Aurora

I have to note that although this show is a good idea overall, there are inaccuracies in it, deliberate or not.

For example, it was NOT the November 7, 1917 Bolshevik revolution that abolished Tsar Nikolay (Nicolas II) and the monarchy in Russia. It was the preceding February 1917 revolution, which had absolutely nothing to do with Lenin, who was at the time in exile, nor the Bolsheviks. Instead, the February 1917 revolution had everything to do with oligarchs, the elites, tsar’s own relatives and top generals, and it was supported by the British Empire and the West. In fact it was the world’s first color revolution, resulting in anti-tsar coup. It was the tsar’s army generals who made Russia’s last Emperor Nikolay II (Nicolas II) abdicate. The ‘Temporary Government’ ruling the country after tsar’s abdication consisted of political elites, big capital and major industrialists. In several short months between February and November, that government plunged Russia into a complete catastrophe. Bolsheviks came in to pick up the pieces of the crumbling empire. The truth is vastly different from what most believe, and it is very complex.

But the events of 1917 are only a small part of the whole story. The multidimensional truth I will tell you, is more striking, amazing and explosive than you could ever imagine! What really happened and how it’s all related to Vladimir Putin, Russia the Great Balancer and today’s Earth Shift? You will hear all about it in upcoming webinar THE PUTIN ENIGMA! 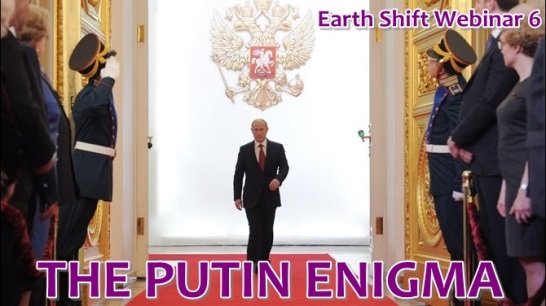