Due to major breaking news and the monstrosity of what’s happening, I am making this article FREE to all on Patreon!

Mass expulsion of Russian diplomats is underway in the USA, Canada, Germany, Netherlands, France, Italy and other EU countries. The most are being expelled from the US – 60 in total. US is also closing yet ANOTHER Russian consulate on its territory! 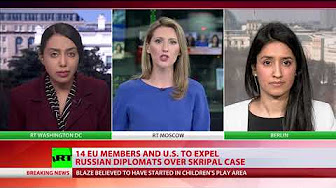 US and EU are actively building new Iron Curtain and Berlin Wall Against Russia!

How can we change the status quo and get out of this vicious cycle?

This article is open to all of you!

SUPPORT ME AND MY WORK! SUBSCRIBE TO LADA RAY ON PATREON!

For more on my theories, books and webinars, and to follow future releases

Go to my main site: LADARAY.COM!

The newly declassified documents compiled by the George Washington University prove what Russian leaders, from Gorbachev to Putin, asserted for years: US and German leaders promised Gorbachev and Soviet FM Shevarnadze that after the fall of the Berlin Wall and re-unification of Germany NATO would under no circumstances expand eastward and that the balance of power and national interests of Russia would be fully taken into account. Germany, under this agreement, was supposed to be a neutral country.

US authorities and NATO have always publicly denied the existence of this agreement, which was promptly broken by the US, Germany, EU and NATO. Recently, ex-ambassador to Russia under Obama and a well-known Russophobe Michael McFaul, in an interview to an Estonian news service said that the assertion that NATO broke the promise given to Russians not to expand east is just a myth. As the documents prove, Russians were telling the truth, and US/Germany were indeed lying.

The evidence presented in the video above shows without a shadow of a doubt that US/Germany/EU/NATO lied and swindled Russia and the USSR. The temporary weakness of Russia was used as an excuse to break promises. Moreover, Germany never paid in full the agreed upon compensation for the withdrawal of Soviet troops, and we are talking billions of euros (plus close to 30 years worth of intrest!). This Germany denies as well, but I’m sure the documents to that effect will also come to light in due course. By the way, I have discussed this issue in Earth Shift Webinar 6: THE PUTIN ENIGMA.

Incidentally, US as a rule appoints first-rate Russophobes, who pass for ‘Russia experts,’ as ambassadors to Russia. There was once an exception, but that single non-Russophobe ambassador didn’t survive in his post for too long and was quickly recalled.

You may remember my Twitter altercation with the so-called ‘Russia expert’ Michael McFaul. Read what happened here: “I never orchestrated color revolution in Russia” My Twitter exchange with US ex-ambassador McFaul. Of course he did — a well-known fact in Russia, But it’s like Robert De Niro said in ‘Wag the Dog’ — ‘deny, deny, deny.’  They’ll always deny everything, unless they are caught red-handed, and even in that case those slippery ones will somehow squirm their way out of a tight spot.

McFaul has a large Twitter following consisting of first-rate Russophobes, many of them unfortunately Russian-speaking, such as the direct enemies of Putin, Ukraine nazis and nationalists, run-away oligarchs living in London and US, and Russian pro-West opposition.

In the wake of the Russian Olympic ban, a couple of days ago McFaul wrote that Russians should know that the Russian team, flag and anthem ban are all because of bad Putin. It is Putin who is to blame for the Russian athletes’ predicament, he proclaimed. In doing so, he: 1. confirmed that Russian athletes’ ban is politically motivated, 2. revealed fully who he is working for. It is clear that the whole ‘Russian Olympic ban’ psyop has been designed to divide Russian society and to try to damage Putin’s reputation before the upcoming Russian elections 2018. I am preparing a whole big report on what’s up — to be published soon! Stay tuned!

Just a reminder that

are on BIG HOLIDAY SALE!

I will also send you 2 Manifestation Rituals as FREE bonuses with your consultation!

Some early dates are available, and if you order yours soon you may get your Skype or written consultation before New Year’s (read each consultation page for details)!

and I am making several of them FREE for FuturisTrendcast subscribers!