It wasn’t my first choice to bring up such subject before the weekend. But Macedonia is boiling over. I believe important and volatile events are taking place in the countries that used to be parts of the former Yugoslavia, and people should know about them. My forecast is that the situation in the Balkans will continue heating up.

There are objective reasons for that: 1. A large number of people in the former Yugoslavia feel duped and they want to right the historic wrongs that were forced on them by the West; 2. The Balkans have historically been a very volatile and controversial region; it’ll continue being so during this Earth Shift.

The Balkans and former Yugoslavia are usually overlooked, silenced or completely misrepresented in the West; therefore I feel the need to explain what is happening. 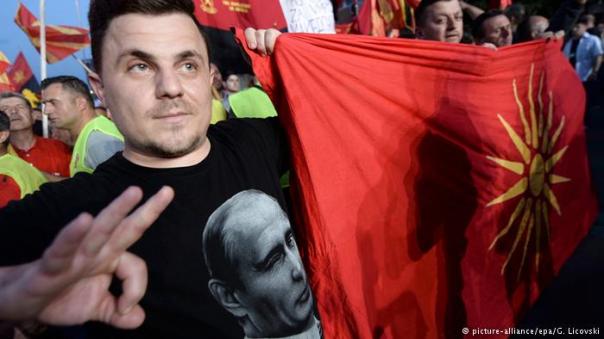 A did a video about attempted color revolution in Macedonia – see more at the bottom. It took place (oh, surprise!) when then president of Macedonia Gruevski was visiting Russia and talking cooperation with Putin. The driving force of the color revolution was the Muslim Albanian minority. Notably, some of the color revolution participants resided in Macedonia, but, per reports, thousands of trained foreign agents were infiltrated through the Kosovo and Albania border. As a consequence, then president of Macedonia resigned – apparently after blackmail and life threats. New government was elected, which gave more seats to Albanians and fewer to the core ethnicities of Macedonians and Serbs, who are Orthodox Christians. The new government has been very subdued and ‘suddenly’ all talk of any cooperation with Russia stopped.

It has to be noted that Russia is a natural trade and cultural partner for Macedonia, as well as neighboring Serbia, Montenegro, Bulgaria and other countries of the region. There is profound and well-cherished cultural, linguistic and religious closeness. (As a side note: remember, I did a couple of articles on FT about Bulgaria and Slovenia and how they feel about Russia). There is a strong mutual affinity between Russia and all of these countries. Same goes for Greece and Cyprus. The only problem, Russia does not share a border with the Balkans region.

Because there is such mutual affinity and strong desire to be closer to Russia, the West (US/EU) has made it its mission to sabotage any such attempts and has done absolutely everything in their power to prevent meaningful and productive relations between Russia and the Balkans. But the pull remains strong. Therefore, US/EU continue sabotaging it every step of the way. 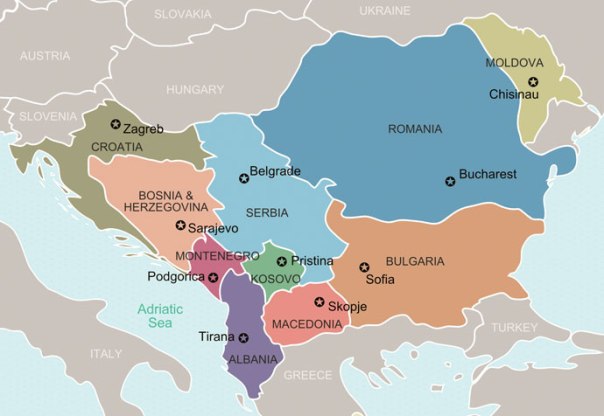 ***Some corrections to the map of the Balkans above – the map was found on the internet. Slovenia was also a part of Yugoslavia, it is technically a part of the Balkans, and although Catholic, certainly an integral part of the South-Slavic world. Slovenia’s break-up with Serbia in the ’90s was the only peaceful and orderly, except Macedonia. Also, Greece and the European part of Turkey are part of the Balkans.

Macedonia borders both Albania and the illegally torn from Serbia Kosovo. Kosovo is a historic, ancestral Serbian land. However, in the past 50-100 years or so, slowly, more and more Albanians seeped across the border and settled in Kosovo, until they constituted a large minority, and after having unseated most native Serbs, a majority. This allowed Albanians to overtake Kosovo and claim it as their land.

Kosovo Albanians have been used in this conflict as patsies and as a thorn in Serbia’s side (much like today’s ukro-nazi Ukraine has been designed to be a thorn in Russia’s side). By extension, the Kosovo terrorism threat and instability also hurts Macedonia and Montenegro. Every time either of the three former Yogoslav remnants tries to ‘misbehave’ such as get closer to Russia, the strings are pulled and a violent coup, color revolution, civil war, economic/political blackmail and threats against leaders take place.

The driving force behind Kosovo being torn from Serbia and recognized as independent state were Bill Clinton and his wife Hillary Clinton. Along with them – the usual suspects, such as senator McCain and the majority of both democrats and republicans in the USA. EU wasn’t far behind. In fact, everything was done by the collective West to create permanent hostility and embed a profoundly unresolved conflict in the region. All this was necessary to weaken Serbia, and by extension, Russia.

During the Yugoslav wars of the ’90s, taking advantage of the fact that Russia was at her weakest and Serbia committed a lot of errors, EU and US broke up Yugoslavia, but didn’t stop at that. They wanted to break up what was left of core Serbia as well. They largely succeeded: first the war crimes committed against Serbs were silenced and Serbian government and population were vilified. Then Kosovo was declared an independent state, immediately recognized by EU and US, but still unrecognized by many countries, including Russia and Serbia. Later in 2006, Chernogoria (Montenegro) was also torn away from the weakened Serbia.

Macedonia, one of the fall-out tiny republics formed in 1993 as a result of the breakup of Yugoslavia and the dismemberment of Serbia, is ethnically, linguistically and culturally an Orthodox, Slavic country, very close to both Serbs and Bulgarians.

We are now observing what happens to a small place such as Macedonia, which isn’t designed to function as a separate state. Every small piece torn from the whole weakens the whole along with all of the breakaway parts. Macedonians, who were lured away from Serbia by the promise of a wonderful life as part of the EU (which, incidentally, never happened) are now reaping the consequences of a bad decision.

In the past 20-30 years the Albanian minority in the country grew from single digits to 25-30 percent. When this minority became large enough, it began demanding more and more political power. Lately, the Albanian minority demanded the post of the head of the government. The current president, whose last name is Ivanov (can’t get any more Russian/Slavic) refused to cave in to Albanians’ pressure.

You may ask, what pressure if they are a minority? The problem is, as I explained above, Albanians enjoy a wholesale support of Brussels, Merkel and US. This emboldens them to demand more than they should. They know that the entire force of the EU/USA/NATO is behind them. This, sadly, yet again reminds me of the behavior of the Kiev junta, who go around EU and US demanding more sanctions, tough rhetoric against and public spanking of Russia – and they get indulged by both EU and US! Why? Because you’ve got to throw the bones to your chosen agents so they continue performing the dirty work.

Much like the Kiev junta against Russia, Crimea and Donbass, Kosovo and Albanians are used by the EU and US as a ram in the Balkans. Kosovo is a bonified terrorist state, specializing in drug, weapons and organ trafficking. Kosovo houses Camp Bondsteel, the USA’s largest military base abroad. It also specializes in training radical Islamists for terrorist acts in Europe.

Albanians, some of whom have fallen under the influence of radical Islamists and ISIS, are dangled in front of Macedonian and other governments in the region as a constant threat, should they make one wrong move. The sad fact is, Macedonians have become hostages in their own country.

The present crisis arose when ethnic Albanian was elected as speaker of the parliament, bypassing all legal procedures. It appears the votes were rigged and/or not counted.  It was so obvious that the revolution began and people stormed the parliament. As of now, Macedonian parliament is occupied by protesters.

The illegality of his election notwithstanding, EU rushed to recognize the Albanian speaker of Macedonian parliament; EU’s FM Federica Mogherini came out immediately in his support. The EU also expressed an ‘outrage’ over the protesters actions. Where was EU’s outrage when the 2014 bloody color revolution and parliament storming took place in Ukraine?

Macedonia has been boiling over for months. Similar mass protests have been happening in Montenegro. Serbia is also balancing on the brink. All of these small countries are being dragged into the EU and NATO, against the will of their populations. In fact, these countries present no value to either the EU or NATO. There is no big economy or strategic assets to be had there. The only asset is the natural affinity with Russia. In the minds of the dark forces ruling the West, this ancient affinity and this ancestral memory must be destroyed at all cost. What is happening in the Balkans is the mirror image of the Russia-Ukraine situation, albeit on a smaller scale.

The breakup of Yugoslavia was a terrible mistake. It’s much easier to destroy several small countries than one large. The people are discovering this the hard way. So far meek and subtle, I detect an underlying desire of some of the former Yugoslavia countries to re-unite. There is also a desire to be closer to Russia; after all, some in the Balkans consider Russia their Mother. 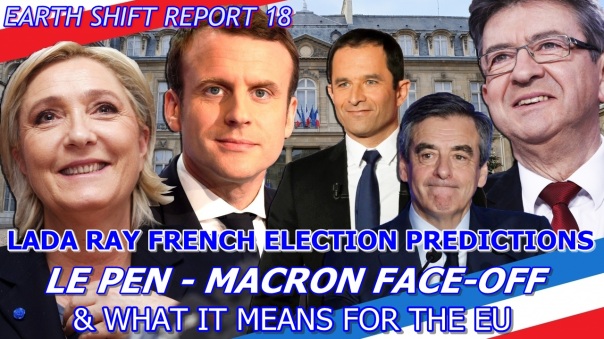 Those who listened to part 2 of my mid-September Cosmic Switchboard Show interview, know my prediction about #Hillaryshealth. If you recall, it was right after she collapsed at the 9/11 ceremony and speculation about her health went viral. Back then everyone was expecting Hillary to be replaced as nominee by Biden or someone else within Democratic Party.

In the interview I said that it wouldn’t happen. My prediction has been that Hillary will not allow to be replaced due to her diabolical ambition and overriding drive to be in the White House. I said that if need be, she’ll crawl to the debates from her death bed. I also said that Hillary was a chosen NWO candidate.

All about that interview, with links:

Part 1 of the interview is FREE on YouTube: LISTEN HERE.

As we have seen from 1st presidential debate, my prediction yet again is coming spectacularly true. Not only Hillary showed up for the debate all perky and smiley, but she also had a considerable amount of help. Because Hillary Clinton is a chosen candidate of certain US and global elites, they will be ‘helping’ her all the way. She is their last hope: they’ll pump her up with drugs, they’ll use any sleight of hand technique available to propel her into the White House.

Also, let’s recall that since 2015 I predicted that the Democrats will lose this election and warned my followers not to vote for Hillary Clinton!

Watch the US Elections spectacle unfold!

HEADS UP! In October I plan a separate report on US Elections, Hillary and Trump, in which I will reveal my whole view of the US Elections, its results and consequences. Please stay tuned for some big announcements!

In line with my predictions, below are some interesting videos, showing how first presidential debate was rigged in Clinton’s favor.

Pay attention in the end of video 1 to how an obscure little man comes along, takes Hillary’s notes, signals to host Lester Holt and passes the papers to him when everyone’s looking the other way. Other vids are equally revealing. Video 4 reveals how Hillary’s podium was custom made for her to make her appear bigger and on par with Trump, plus secret equipment is removed from under her podium under Bill Clinton’s supervision.