Remember how a few months ago a meteor exploded above Chelyabinsk in the Ural Mountains, Russia? It happened shortly after the release of my visionary fantasy/thriller THE EARTH SHIFTER, and much like it was described in the book. Many readers had dubbed the book prophetic. Read more about THE EARTH SHIFTER.

Check out the post and eyewitness videos: The Earth Shifter Plot Playing out in Real Time: Massive Meteor Rocks Russia

I feel a similar sense of Deja Vu with the recent Boston Marathon bombing. 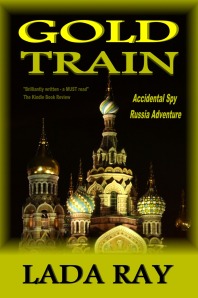 The mystery/thriller GOLD TRAIN is based on famous historical events of 1918, but it is set in today’s Moscow, St. Petersburg and New York. The protagonist, international journalist Jade Snow, who’s used to dodging stray bullets in Iraq, rushes into marriage and has a child before she is ready, and as a result, she has to say a premature good bye to a promising career. While Jade stays home with the baby, her husband jet sets around the world (hint: his career is fine). But Jade’s ever present longing for freedom and world adventures generates a subconscious rebellion, so when she finally gets a chance to go to Russia in order to investigate tantalizing mystery of the missing treasure of the Russian Empire, she lands herself in the middle of a deadly conspiracy that threatens to change the balance of power not only in Russia, but also in the world, and in the process, she meets a mysterious stranger, who may well change her life forever.

The conspirators are the Russian monarchists, backed in secret by spy organizations like CIA and MI6. And while preparing to destabilize Russia through civil war, they employ Chechen terrorists to do their dirty work, including attempts of deadly bombings at the Russian Metro, high-speed train, and other places (incidentally, it is mentioned in the book that Chechens, wanted for terrorist activities in Russia, are often given political asylum in the USA, UK and Sweden). While looking for the killer of her Russian friend and hunting for the treasure, Jade along with the FSB operative Alexei, must prevent terrorist attacks by the Chechen militants.

Boston bombing: First, my deepest condolences to all the victims of this tragedy, and to their families.

It turns out that the two suspects in the Boston Marathon bombing are the Tsarnaev brothers, aged 19 and 26, residents of Cambridge, MA, and immigrants from North Caucasus. Ethnically Chechen, their family resided in the Autonomous Republic of Dagestan, neighboring Chechnya. In fairness, I need to point out that some suspect a false flag operation in the hunt for the Tsarnaev brothers. However, I am not prone to conspiracy theories. Conspiracies happen all the time, yes – as you would see if you read my books. But conspiracies I write about are based on proven real world events. In this case, I have no proof of false flag, although voices in its favor persist. Either way, so far there isn’t enough information to make such a conclusion – yet.

After the collapse of the USSR in 1991 the always stormy and confrontational North Caucasus, populated by many warring tribes, where a child would receive a knife as a birthday present at 2, reverted to its nature. With no jobs for the young and no government controls, fundamentalist Islam, terrorism and Al Queda influence spread like fire. In the past 5-7 years, Chechnya has actually stabilized as the Russian government poured billions into this little autonomous republic in order to rebuild the industry and generate jobs in this beautiful, but unstable and depressive region. After the peace was finally restored and the population turned away from terrorism, the remnants of the “rebels” had crossed the porous borders into the nearby autonomous republics, notably, Dagestan, where they would hide out in the mountains.

The FBI has now admitted that the brothers may have had links to Russia’s most wanted man, Chechen terrorist Doku Umarov, who has blood of many civilians on his hands, including the deadly Beslan School bombing. Many of his cronies received asylum in the UK, US, etc., after their terrorist acts in Russia. It is a well-known fact that Doku Umarov’s fighters received training in Al Queda camps in the Middle East and parts so Europe. However, over the years, Russian requests for extradition of said terrorists had been routinely denied by the USA, UK, Sweden and Poland, despite irrefutable evidence of their terrorist activities. Take a close look at Mr. Suleimanov, the leader of the Chechen terrorists in GOLD TRAIN – look familiar?

According to correspondent/author Pepe Escobar, “Chechnya’s new jihadis want an emirate, as envisioned by Doku Umarov; a Chechnya-istan modeled on the Talibanistan of the late 1990s. Umarov always insists on global jihad – from Afghanistan and Iraq to Somalia and Palestine – against “everyone who wages war against Islam and Muslims.” Just as I have met a lot of Chechens fighting alongside the Taliban – and then captured in Afghanistan before 9/11 – there are quite a few Chechens in Syria as part of a global jihadi brigade fighting the Bashar Assad government in Aleppo. Chechens did hit soft targets in the past; it could be two Dagestani female suicide bombers blowing up the Moscow Metro in 2010, killing at least 40 people and injuring 100, or the gory outcome of the Beslan school tragedy in 2004, when no less than 334 hostages died, most of them children.” Escobar, The Boston Blowback

Image: A member of the SWAT team motions to a resident to come out of the house as they conduct a house to house search for Dzhokar Tsarnaev, the one remaining suspect in the Boston Marathon bombing, in Watertown, Massachusetts April 19, 2013. (Reuters / Brian Snyder)

The incredible irony of the situation is that the Boston bombing suspects, brothers Tsarnaev, upon arrival to the USA, claimed and quickly received POLITICAL ASYLUM together with their relatives. They arrived to the USA in 2003, claiming to be refugees from Chechnya, although at the time their family lived in the neighboring Dagestan. They were still children and grew up in the USA, attending American schools, the younger of the two becoming a naturalized citizen, and winning a scholarship to MIT (according to reports).  Another unbelievable irony is that several years prior, Russian authorities had contacted the USA, warning of possible older brother’s links to Al Queda and Doku Umarov, and demanding investigation. At the time, FBI scuffed at Russia’s warnings, as the US and UK insisted on calling the Chechen terrorists “freedom fighters.”

I guess, now that it has happened in the USA, the “Chechen freedom fighters” will be finally re-branded terrorists. Isn’t that amazing! Kinda makes you wonder when will the childish, ignorant and backwards political rivalries with Russia and other countries designated as “enemies” by the USA finally stop, and when will justice and reason finally prevail?

In fairness, I have to mention two things:

1. Most ethnic Chechens and Dagestanis are peaceful and law-abiding citizens of Russia, who want to live their lives and build a good future for their kids. Incidentally, most of the wrestlers on the Russian Olympic team, responsible for many of the Russian medals at the last Olympics in London, come from North Caucasus. Alas, as always, a few rotten apples spoil the harvest.

2. Also, the suspects’ parents still reside in the Autonomous Republic of Dagestan, Russia, and they deny their children’s involvement in the bombing, claiming it was a set up by the FBI. The story is getting more and more bizarre by the moment. Included are some investigative and eye-witness videos. Have a listen!