SHARING THIS FREE WITH ALL LADA RAY FOLLOWERS! I wish I could only talk about positive and nice things, but I can’t keep silent when these kinds of things go on!

Originally published on LadaRayPatreon on Apr 13 at 3:30am 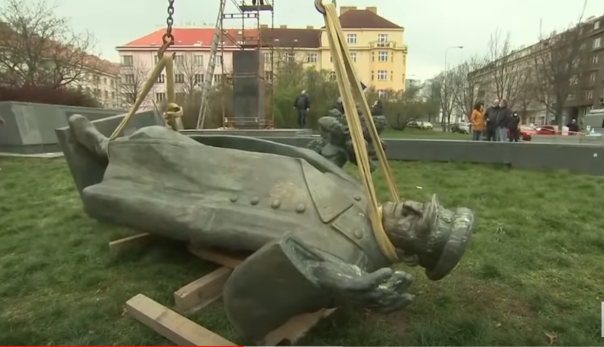 This was until recently the monument to Marshal Konev in Prague, liberator of Prague and Auschwitz. It was built by locals who knew the real truth because they witnessed the heroic liberation of Prague by the Soviet troops. The troops had to do a major detour in order to help the ‘Prague insurrection’. It was past Nazi Germany’s capitulation and past May 9th, the official Victory Day. Konev’s move saved hundreds of thousands of lives of local civilians and it also saved this one-of-a-kind Gothic city from deliberate demolition, which was ordered by German Nazis. Instead of honoring someone who saved so many lives, and Prague itself, the Czech authorities decided quietly, while no one was there due to quarantine, to erase any memory of that historic event.

Congrats! They’ve won a war against the monument of someone who has been dead for over 50 years, someone who once saved them but now cannot defend his memory. And they won a war against hundreds of thousands of Russian/Soviet servicemen and officers who sacrificed themselves so that these worms could convert oxygen into CO2.

Well, those who spit on their history, are doomed to repeat it 100-fold.

The Konev monument was demolished, a cynical and mocking reason given by the Prague authorities: “He isn’t wearing a mask and therefore has to go.” That’s ‘civilized’ prague. That’s czechia, a proud member of NATO and EU.

But there is more… much, MUCH MORE!

or become a FREE FOLLOWER – no strings attached:

🧭 Heads up! To help you navigate these turbulent & fast-changing times