I enjoy periodically scouting the globe — virtually or in person, as the time and my fancy permit — to find out if various geo locations might be interesting and/or desirable for a global relocation, or simply just for a relaxing vacation. I’ve mentioned previously in EARTH SHIFT REPORT 17: Quality of Life Worldwide: Lada Ray Geo Calibrations that many people at this time of the EARTH SHIFT will be considering relocating to another city, country or continent. Therefore, once in a while, if a geo location intrigues me in some way, I’ll be posting an article about it here, on FT.

In no way such posts should be considered a promo or endorsement. Everyone must make their own decisions on relocation.

For those who are in need of a personalized advice, including Quantum and Geo Calibrations, coupled with my usual predictions, forecasts and global experience, I am presently considering re-introducing Lada Ray Private Consultations. I’ll have a separate announcement soon.

Today we talk Alanya, Turkey. Summer vacation time is approaching, and I thought some might be interested in this famous Turkish resort area. This isn’t a promo or recommendation by any means. This is an exploration…

I like to explore off the beaten path. Some rare gems can be found by stepping off the paved road — figuratively speaking, of course.

This is meant to be a positive and relaxing post, so I won’t go much into politics here. I’ll just mention that after a 1.5 year period of strained Russia-Turkey relations, due to Turkey shooting down Russian Su-24 jet, there is a huge improvement. Turkish Stream is back on the map, and other joint infrastructure mega projects are a go. Turkish produce and construction workers are slowly allowed back into the Russian market, and Turkey is gradually distancing itself from the West and getting into a more balanced relationship with Russia. Not all is champagne and roses, but the delicate and complex EARTH SHIFTING geopolitical game being played by Putin is bearing some very nice Turkish fruit.

Alanya and other resort areas of Turkey suffered a devastating blow when tourism from Russia suddenly dried up over two years ago, following the Su-24 downing incident and Russia’s incursion in Syria. But Putin played a virtuoso game of chess, resulting in major shifts in Turkish / Erdogan’s policies towards the West and ISIS vs. Russia. Read about all that in ESR5, ESR7 and ESR13.

Since then, the hotels and beaches are slowly filling in again. The touristy Alanya is international, where you can hear various languages, such as French, English, Italian, German, and of course, Russian. In fact, there are hotels and resorts in Turkey built specifically to cater to the preferences of the Russian tourists: usually all-inclusive packages.

1. You’ll see Kleopatra Beach footage below – the clear turquoise sea, nice white sand and very few people so far in May, 2017. Tourists are still reluctant to return. We’ll see what it will be like in June-August.

2. Food, hotel and various health spa services prices are 1/2 to 1/3, sometimes even as cheap as 1/4, of those you’d expect to pay in the West. But the quality of accommodations and food is as good, or better. Fresh fruits and veggie prices are especially strikingly low compared to Western, while the freshness and quality is usually substantially higher.

***Just to mention, as everywhere in the Mediterranean, you have to be careful not to get a major sun burn, even in mid-May.

Vids below are by an ex-Ukrainian Mikhail Volin (YT channel ‘ The Notes of Slavs in Russia’) who had to flee prosecution in his native city of Melitopol, following the 2014 Kiev coup. Typical of millions of other Ukrainians, he is now a Russian citizen, enjoying his freedom and much higher standard of living, and happily residing in Moscow.

Sorry for the ‘Ukraine’ slip, I did promise this post to be politics lite… Ah, well, can’t hide from reality.

But back to Alanya. Basically, the main message of this post is that Turkey has decent and new tourism infrastructure at very low prices, warm sea and all the sun you can get. Real estate is equally new and cheap, in part because of the instability of the region. But places like Alanya are tourism oriented and seem to be in another world – far away from conflict.

Video 2: Alanya prices. Beginning of video: bus ride, mall and supermarket. At 18:10 starts bazaar and fruit/veggie prices to die for. Prices are in Turkish Liras. To convert into USD: 1 Turkish Lira equals 0.28 US Dollar, or 28 cents. On the video, the Russian blogger converts everything into rubles, of course, but you can see prices in Liras displayed on camera. I was especially struck by 1.5 kilos of strawberries for $2 (that’s more than 3 pounds!) and 1 kilo (over 2 pounds) of fresh tomatoes for 28 cents and 56 cents!

***One caveat with Turkey: at the bazaar Mikhail mentions ‘standing guard over his girlfriend Elena,’ while she bargains for gifts for relatives back home, because ‘you can’t let a girl out alone in those parts.’ Incidentally, this is the case in any Middle Eastern country, and in Caucasus, as well. So, anyone who decides to explore those parts – do keep it in mind!

It’s a mixed bag, yet with some promise.

Below min. positive level of 200 for QC and CHI. GC is on the level of pride: typical of the West and well below what I want to see – disappointing. However, CHI shows how much the locals are striving to please the tourists. This could be the low season calibration and could go up when and if tourism returns in earnest, and if Trukey manages to stabilize. That’s why at present it’s so cheap there, by the way!

And now look at GOOD positive values for GC, K. Beach and especially the bazaar! Nice, strong CHI for the last 2!

(These aren’t calibrations for the entire Turkey – just for this area!)

For the quality of life Geo Calibrations of Turkey, plus 120+ other countries and many cities and regions of the world, read EARTH SHIFT REPORT 17. Definitions and complete calibration interpretations for each level are also in this report!

For personal Geo Calibrations consultation for your area of interest order: 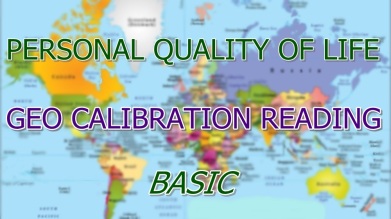