You may all recall that I did several articles on forbidden history and linguistics, as well as the Russian language truth code. This includes popular articles:

You may also recall that I mentioned a highly evolved EtRuskan civilization that existed in Italy, which supposed to have vanished and whose language was for many years in the West considered ‘illegible’…until Russians read it using ancient Rus alphabet.

We had an interesting discussion on Twitter on the etymology and meaning of certain words, and I’m reposting it here for you. There is so much more to the story, but 160 characters per tweet is a start. This little discussion will expand your mind and make you question more of th official view of history and origins of mankind, religions and consciousness.

And I promise that I will continue writing and speaking about these fascinating topics in the future.

@LadaTweets may I ask for a translation of “Velch”. Etruscan town & also used in relation to demos in Kiev but no google or bing translate?

More from Lada: Veles, Rus god of cattle, bounty, forest and pleasure/enjoyment was prototype for: Pan depicted with horns, Bachus (god of wine). And of course, later in Christianity it became… who else: the devil.

Veles, as the lord of forest is often depicted with a bear. And note those horns! 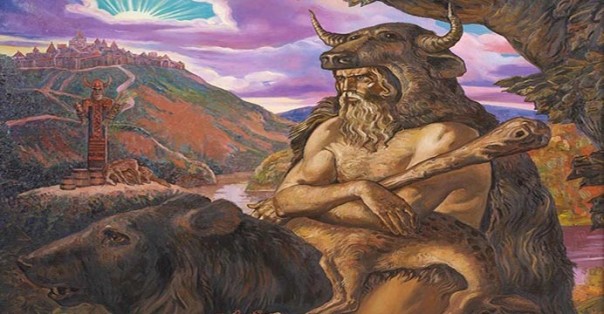 More on Vedic god Veles: Russian word ‘vesel’ is anogram for ‘Veles’ and it means ‘joyful, enjoying’ but can also mean ‘pleasantly drunk’ as in celebrating with friends.
.
LADA: The best word to describe it is ‘merriment.’
.
Much more to say on Veles (also called sometimes Volos) that won’t fit in 160 characters:
Lada: the direct line of progression from the positive God of cattle, bounty (hence wine, symbolizing bounty) and merriment becomes on one hand the Greek Pan, god of forest and trickery, and on another Roman Bachus, the god of wine.
From thereon, as human consciousness progressively declined through millennia prior, the negative connotiations began to prevail. Such as: drinking wine, loose morals and excessive indulgences lead to the devil, according to Christianity. Note the HORNS — typical depiction of Veles, due to cattle. This progresses to cornucopia for bounty, and to drinking wine, the horns of Pan  — and consequently, as the negative consciousness sets, to the devil.
.
Rus Vedic God of cattle, forest, merriment and bounty Veles (Volos, Velech, Voloch) 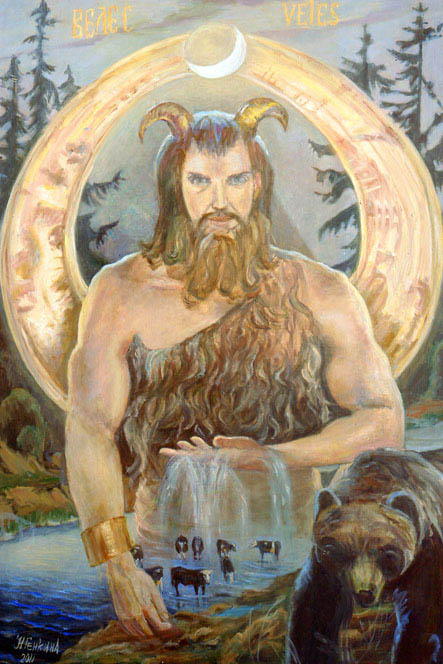 The Russian language never ceases to surprise me:

(Lada: this was a nice catch and it’s striking when you think about it!)

Veche – ancient Russian word, means popular gathering and counsel. It was the way of direct democracy in ancient Rus states.

Only so much can be said on Twitter. Much more to add:

Usually, Veche would be called on a central square of town, village or city in the time when a serious decision in the affairs of the state was needed. Everyone could express their opinion, register objection, and it was all culminated with a direct popular vote. The ancient Russian city of Novgorod was famous for its robust Veche and direct democracy tradition 1200 years ago, and earlier in history.

Etymology of the word Veche:

The joint life force that opens up knowledge

Or: popular life force clarifying a difficult but important decision

This good old word is being now abused by ukro-nazis and Saakaashvili, who are trying to create Maidan-3 in Kiev to overthrow Poroshenko. Saakashvili has announced that he is calling a ‘veche,’ aka, a popular gathering to start another Maidan.

I can tell you though that it’ll be hard for them to get the Maidan going without the sponsorship from the West. Maidan-3 in itself isn’t a problem. As I said many time before the sooner the situation is brought to a boiling point the sooner it’ll get resolved.

But I seriously object to them spoiling the word Veche to signify their gatherings. Not to mention the ukro-nazi denial of Ukraine’s common ancestry with Russia, yet using the word that millennium ago was brought to Kiev from the ancient Russian city of Novgorod.

This is not the fist time a good word or a positive symbol is stolen and made work for the dark side: Hitler once stole the positive Vedic symbol of the sun and our spinning galaxy, Swastika, thus giving it a bad name.

Rus Slavic Vedic Gods (some of them)