One person was killed when armed men stormed a police station in Yerevan, the capital of Armenia, on Sunday. Police have surrounded the building and are negotiating with the group, who took several hostages. The Yerevan’s and country’s deputy chiefs of police were taken hostage, among others. The internet in the country is also currently down.

This is today’s live streaming video from RT’s Ruptly: LIVE outside police station in Yerevan as hostage siege continues

Ruptly is LIVE from Yerevan on the fourth day of a hostage siege on Wednesday, July 20, after an armed group stormed a police station in the Armenian capital and took control of the building on Sunday, July 17. One person was killed and several injured during Sunday’s attack. Soldiers have been dispatched to surround the building and police have continued negotiating with the group.
Armenia’s Deputy Police Chief General Major Vardan Egiazaryan and Yerevan’s Deputy Chief of Police Valeri Osipyan are believed to be among the hostages. Two hostages were reportedly freed on Tuesday, July 19, with seven or eight believed to remain inside. Local media are reporting that the group, which calls itself the ‘Daredevils of Sassoun,’ is demanding the release of jailed opposition leader Jirayr Sefilyan, who was arrested in June for illegal arms trafficking, as well as the release of other political prisoners, including Gevorg Safaryan, Valodia Avedisyan, and Shant Haroutynyan.

Yerevan is a battle zone: street clashes with police on streets of Armenian capital as the new color revolution attempt unfolds:

This post should be read in conjunction with my previous Deadly Extremist Attack in Almaty, Kazakhstan.

The situation in Armenia and Kazakhstan – previously two of the most stable members of Eurasian Union – is escalating. The events in these two former Soviet republics, one located between Central Asia and Siberia and another in Caucasus, mirror each other and are connected. The real target in both cases is the weakening of Eurasian Union, and consequently, weakening of Russia.

The events in Armenia are retaliation for Armenia joining Eurasian Union, coupled with the goal of destabilization of Caucasus and punishment of Russia for successes in Syria, Turkey and the Middle East. Kazakhstan is being punished for being a founding member of EAEU, plus Nazarbayev’s key role in bringing to fruition the reconciliation of Russia and Turkey.

Four major attempts at color revolution/Maidan coup in Armenia in the past two years, as well as the CIA color revolution technology from Ukraine to Armenia discussed in Lada Ray’s 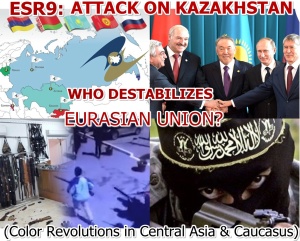 We are witnessing the continuation. Unfortunately, my prediction is that such attempts to destabilize EAEU and its members will continue. Those who organize such events, namely USA/CIA and other Western entities, have an uncanny talent for seeking out the weak links: violent sociopaths, terrorists, traitors, disgruntled or greedy employees, etc. At this moment in the process of the Great Earth Shift every weak link is a major risk. Each and every country better head this warning!