I AM POSTING THREE PODCASTS IN A ROW! ALL TODAY! 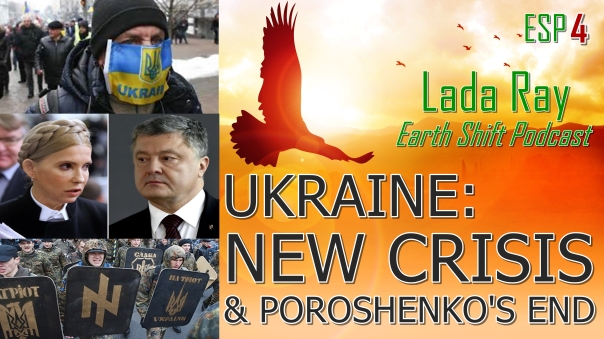 **NOTE! LADA RAY ESP VIDEOS ARE NOT MONETIZED ON YT! IF YOU SEE THIRD-PARTY ADS, YT POSTED THEM WITHOUT MY PERMISSION!

ESP4 — listen all about:
1. Skynews uncovers that Ukrainian children’s camps are training “Death Squads” promoting the idea that ‘Russians Not Human, Need to Be Shot on Sight’
2. Ukraine elections and approval ratings: No.1 Yulia Timoshenko 20%; No.3-4 Poroshenko under 10%, and falling
3. Poroshenko/USA’s huge mistake — Religious schism failed: people’s consolidation around Russian Orthodox Church’s Kiev bishop Onufry. The unanimous decision of the Ukrainian Church to stay with the Russian Church and to sever ties with Constantinople patriarchy.
4. Junta’s shocking attack against Ukrainian human rights activist Elena Berezhnaya (mind-boggling stuff!)
5. Gas riots and freezing Ukraine. Whole cities without heat at freezing temps!
6. What will happen next – where is Ukraine heading? Some new predictions.

This didn’t make it into the podcast, as I found it out after it was recorded.
Re. yet another proof of the devilish role of the US in the Orthodox religious schism. I wrote a full report on it, in which I showed how it became clear that the vast majority of independent Orthodox Churches (there are 15 in total) did not support autocephaly for Ukraine. Please refer back to the report for the full picture.

This new evidence adds another piece to the complete picture. After the announcement by Constantinople Patriarch that Kiev would be granted illegal autocephaly, and after the criticism of this announcement by many independent Orthodox Churches, Bulgarian Patriarch came out with initiative to gather the Global Orthodox Sobor (conference or summit), which would vote on it. The PM of Bulgaria immediately received a call from the US State Dept, telling him to interfere in the affairs of the church (illegally), otherwise US would withdraw all financial support they give to Bulgaria. The Bulgarian PM rushed to the Bulgarian Patriarch and made him withdraw the call for the Global Orthodox Sobor. (This intel came out during this talk show 11/18/18.)

My analysis:
The reason the US feared the Orthodox Sobor so much was that they knew very well the vast majority of the Orthodox Patriarchs would vote against autocephaly for Ukraine and that would mean a major win for Russia. It would consolidate global pro-Russian forces, strengthen Russia and Russian Church, while undermining and greatly weakening the Constantinople (aka, Istanbul) Patriarch, whom they control. It would also weaken the Kiev junta, which they also directly control.

Because all this was easy to predict, the US had to stop any possibility of the Global Sobor gathering.

Generally, the extent of the US meddling in the global Orthodox Church affairs that is presently coming out is absolutely mind-boggling and extremely nauseating. They are now trying to turn the Church into yet another anti-Russian weapon.

Listen to this podcast, where I explain why previously US/West considered Orthodox Church its ally against Russia, what changed dramatically in the past 20+ years and why the US is itching to destroy Orthodox Church now!