← Ancient Russian Tradition Restored: Navy Day Celebrated in Style Along Neva in St. Petersburg
All Roads Lead to Crimea: the Stunning Resurrection of an Old, Yet Newest Russian Region →

Lada Ray’s Take: Was there an attempt on Venezuelan President Maduro’s life? 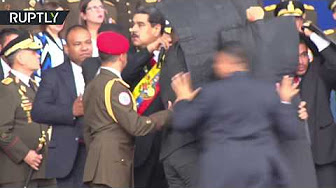 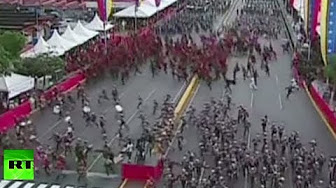 During Maduro’s speech before Venezuela’s ‘Bolivarian Guard’ in Caracas, a drone exploded, flying above the parade. The responsibility for the attack has been assumed by a Venezuelan underground opposition organization. Note that Maduro appears to have much more courage than his army. He actually attempted to continue speaking after the explosion, while, as you’ll see in the second video, the soldiers scattered about like scared rabbits. How much confidence such army inspires, I don’t know. The name ‘Bolivarian’ is meant to inspire courage and consolidation (named after Simon Bolivar, the leader of the S. American fight for independence against Spanish colonialism, clearly a hint regarding the US neo-colonialism).

There are three versions of what happened, as I see them.

1 – The pro-US opposition and US MSM are floating this idea: it was Maduro’s own false flag, to hike his ratings and to justify a crack down against opposition. Indeed, six people have been arrested after the explosion, which proves nothing, as any normal government would do this to suspects.

As to the ‘false flag’ idea, I seriously doubt it. For one, it was very sloppily executed and highly illogical. The shrapnel from the exploding drone not only could have injured the troops and officials, but Maduro himself. I don’t see that at all as possible.

2 – This really was an attempt against Maduro, but very poorly and inefficiently executed. Maduro, like Chavez before him, is a major thorn for the US and the CIA would love nothing more than to get rid of him.

Click to read this very relevant article on Patreon! This article is FREE for my FT subscribers and is strongly recommended if you really want to understand what’s happening!

But the attack seemed very unprofessionally executed. If it was supposed to end in Maduro’s death, there were many more unobtrusive and effective methods of dealing with that. As an example, look at what they’d done to Chavez (I previously wrote about it), or how they dealt with Brazil’s impeached ex-president Dilma Rousseff and her predecessor Lula, or what happened to Correa and Moreno – read FREE article by clicking on above link.

This is why I prefer the third version, which no one seems to address:

3 – It was muscle flexing by the US-backed opposition, and a warning to Maduro. It was basically an intimidation attempt not just for him, but for his military as well. In such case it could have been performed very publicly, in a very flashy way, and perhaps even intentionally sloppily.

I don’t think Maduro can be intimidated this easily, but I would advise him to watch his back very carefully. I know he does, especially after everything that recently happened to his peers: in Brazil, Argentina, Ecuador, not to mention his friend Chavez. But Maduro must be even more careful going forward.

I have no doubts of Maduro’s personal courage. But I wonder about that of his army…

← Ancient Russian Tradition Restored: Navy Day Celebrated in Style Along Neva in St. Petersburg
All Roads Lead to Crimea: the Stunning Resurrection of an Old, Yet Newest Russian Region →
%d bloggers like this: