FT’s dear friend Paleohippy pointed out that while I have mentioned a very high calibration of Santa Fe, NM in the ESR17 Interpretations Section, I have not included it in the GC Worldwide Table. While doing the Main Table I followed a ‘modified double blind scientific approach.’ I simply calibrated on the spot those geo locations within each country or continent that surfaced in my mind at that moment. In other words, I trusted my inner guidance. There was no pre-meditation or pre-knowledge, which ensures a more accurate calibration result.

It appears that Santa Fe popped into my mind as a telling example of Acceptance while writing the Interpretations, but it wasn’t on my mind during the Main Table double blind test.

I know it’s an oversight on my part as truly, Santa Fe is exceptional. Therefore, I added its GC value to the USA section of the ESR17. Santa Fe’s GC for 2017 turned out to be 310 (willingness/cooperation). Not as high as Acceptance, but still off the charts, in comparison to the rest of the world’s Geo Locations calibrated.

I also realized it wasn’t fair not to include Hawaii: another of few US geo locations with GC above 200! Since I was at it, I also decided to add more values to the USA section. It makes sense: USA is a big country and many of my followers live here. After latest additions, USA has 20 calibrations total. In addition to major US cities and some states, those who have purchased EARTH SHIFT REPORT 17 will now see calibrations for NY, NJ, MI, OH states, as well as those for Santa Fe, Hawaii, and some major college towns, such as Princeton, Ithaca, Berkeley and Ann Arbor. Check’em all out in North America – USA section!

I don’t know about you, but these calibrations in many cases surprised me, sometimes pleasantly, and sometimes not.

Also in North America section! Canada was an overall upside surprise of this report! There were other upside surprises, such as the number of large cities in Russia with GC between 200 and 280! I think it will be educational to talk about upside and downside surprises, as well as anomalies of EARTH SHIFT REPORT 17, and why they have occurred. I’ll post my analysis and impressions on FuturisTrendcast after more people read the report!

As pointed out in ESR17, while worldwide calibrations are very telling, they may not be reflective of your particular situation. For example, a city or country may calibrate pretty low, yet you may reside in one part of that geo location that calibrates high. Or the place may be bad for others, but for some reason just fine for your particular needs at this time.

Case in point: one of FT followers (won’t say who to protect his privacy) who lives in the US, while his eyes are fully open to what’s happening around, won’t consider moving out of the country. After calibrating the area he lives in, it is easy to see why. The particular area where he resides calibrates very high by any measure, and especially in comparison to the rest of the country and world in general.

Therefore, to tailor GC and other calibrations to your particular needs, I’ve decided to introduce a new service: Personal Quality of Life Geo Calibration Reading.

You’ll be able to order this reading soon under CONSULTATIONS on LadaRay.com. 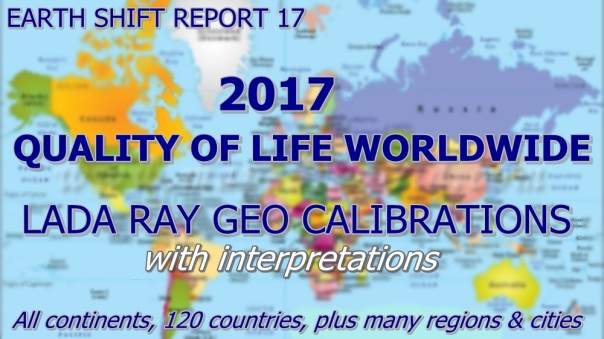 Go to  ALL EARTH SHIFT REPORTS