Lada’s thoughts on the end of NWO: ‘Serbia and Russia! No EU!’ Mogherini booed in Serbian Parliament

‘Serbia and Russia! No EU!’ Mogherini booed by deputies in Serbian Parliament.

You can’t hear a word she is saying, and that’s how I like her. I wonder how this Rothschild-installed globalist hypocrite felt, for once getting a long-deserved taste of her own medicine.

Just another small confirmation of The Great Earth Shift at work, the breakdown of the old NWO system and the budding of the new. It is also another confirmation of the rebalancing work Russia The Great Balancer is doing, as we speak, on our planet.

I first made prediction that NWO globalism is outdated and that it would soon be finished in the 2014 ESR1: IS PUTIN PART OF NWO? 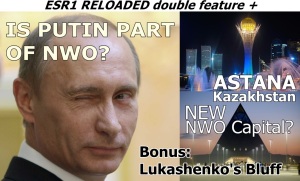 The great changes happening now are just the beginning! More to follow!

This is the real voice of the people in Serbian Parliament – how Serbs really feel about EU, which is being shoved down their throats in spite of their resistance. Incidentally, the neighboring Montenegro and Macedonia are in the same situation. There is a veritable anti-NATO and anti-EU revolution happening in Montenegro, mass protests have been ongoing since last year. At one point, 10% of the population has been out on streets protesting. Yet no one notices it and the sold-out government continues dragging the country into NATO. Bulgaria is also being forced to stay in NATO and EU, despite people’s sympathies to Russia and aversion to NATO/EU Russophobia.

The people of Serbia are demonstrating how real democracy works, as it should. I wonder why the ‘world’s No.1 defender of democracy’ EU doesn’t like it?

I know exactly why. Because the West is an ardent defender of democracy only when it suits them. But they turn into the worst of dictatorships (or make friends with the worst of dictators) whenever possible. We could go over thousands of historic examples to confirm my words. But why go so far; the newest gruesome proofs are right in front of our very eyes: US support of ISIS terrorists; US/EU (including specifically Mogherini!) support of the fascist ukro-nazi regime in Ukraine. And the latest: EU parliament, in violation of the democratic freedom of speech, votes to strip French presidential candidate Marine Le Pen of her immunity and begin her prosecution in order to sabotage her presidential bid.

Therefore, Western ‘democracy’ is a sham and we are observing its slow death. The truth is out, just like it’s supposed to be during The Great Earth Shift.