← Listen to FREE Part1 of EXCLUSIVE Earth Shift Report 16: US ELECTIONS AND WHAT WILL HAPPEN AFTER
Putin about ‘unbelievable idiots’ who organized energy blockade of Crimea →

This is from FT contributor Maddie Walsh @ 1earthunite.wordpress.com!

You know my predictions are not exactly like this, if you have listened to Earth Shift Report 16 and read my earlier US Elections articles on FT. But these calculations do make a lot of sense and they resonate closely with what we’d talked about in ESR16: US ELECTIONS & WHAT WILL HAPPEN AFTER. I thought it was good to have this complimentary perspective. Forewarned – forearmed!

NaturalNews ANALYSIS of possible outcomes from the upcoming presidential election reveals that America only has a 5% chance of remaining peaceful after November 8. This does not mean the violence will occur on November 9th, but rather that events will be set into motion on that day which will lead to an escalation of violence (95% chance, see below).

Here are the scenarios I see unfolding, all based on the best available information right now:

There are three sub-scenarios under this outcome:

Even though Donald Trump wins the popular vote, the democrats have bribed enough electoral college representatives to sway the vote to Clinton, even in contradiction to their own states’ voters.

Should this occur, expect mass protests, violence, bloodshed and many legal challenges in those states where the electoral college votes do not reflect the popular vote. There is no question that the Trump-supporting citizens of America will not accept a “rigged” election outcome where the electoral college votes are essentially stolen from the People. This would very quickly escalate into armed citizens marching in the streets and occupying key government buildings in an armed revolution against corruption.

In my analysis, this is the most likely outcome of the upcoming election, and the democrats have been planting this narrative in advance with ridiculous claims that “the Russians” are running Wikileaks and that Trump is a “Putin puppet” (direct claim from Hillary Clinton in the third debate).

The purpose of all this is to create the narrative where a Trump victory can be declared invalid by Obama. Despite all the talk among democrats about how much they love and respect democracy, the simple truth is that they deeply hate it (and don’t trust it). There is almost no chance that Obama and the Clintons will voluntarily cede power to Donald Trump.

If Obama declares a Trump victory invalid, all hell breaks loose across the nation, with leftists going “full terrorism” and patriots taking up arms to defend democracy against the anti-American traitors in Washington D.C.

Even if Obama and the Clintons admit defeat and agree that Donald Trump is the next President, the liberal voters go nuts and begin firebombing buildings all across America. You’ll see mass riots breaking out everywhere. Obama can then use this to declare Martial Law and, if he wishes, postpone the transfer of power to Donald Trump (or blame him for all the violence, of course).

Remember, the democrats are already running mass staged violence across America (ProjectVeritasAction.com). They can easily stage riots, arson, bombings and much more in order to maximize chaos in the streets.

Based on current information (and considering just how much the “official” polls arecompletely rigged by deliberately oversampling democrats), in my analysis, there is only a 25% total chance that Hillary Clintonwins the popular vote. Here are the sub-scenarios under that 25%:

Scenario 2A (20% chance): Clinton wins the reported vote, but Trump challenges the validity of the election results

This scenario very likely starts with legal challenges to the mass election fraud, but could quickly escalate to a military coup or an armed citizens’ revolt where outraged Americans literally march on Washington and depose the corrupt regime in power.

Expect huge bloodshed in this scenario. There is no question that roughly half of America simply cannot and will not accept Hillary Clinton as their president. She is too corrupt, too evil and too dangerous to maintain the consent of the governed. (Hillary Clinton is a serial criminal who must be indicted and imprisoned if America is to remain anything resembling a legitimate nation that respects law.)

Thanks to Wikileaks and Project Veritas, everyone with a working brain now knows the democrats are hopelessly corrupt and deeply invested in widespread voter fraud to steal the White House.

Scenario 2B (5% chance): Trump accepts the election results and tells supporters to get behind Hillary Clinton

If Clinton wins and Trump admits she won fair and square (which seems VERY unlikely), he could publicly call for everyone to back down and accept the Clinton presidency.

I see the chance of this at only 5%. And even then, so many conservatives and patriots are going to be so angry at this outcome that they may decide to stage their own peaceful protests.

95% chance of mass violence in one form or another

The upshot of all this is that I see only a 5% chance of a peaceful, non-violent outcome to this election. In most conceivable scenarios, America descends into mass violence of one form or another.

This is a direct result of the extreme polarization of political beliefs in America today, where we have an entire class of illiterate, ignorant Hillary Clinton supporters who only watch CNN and have no idea whatsoever that the Clintons are corrupt criminals. Witness the depth of the democrats’ corruption in this Project Veritas veritas (part 3), just released today…

My belief and associated prediction, based on the energy I see unfolding and the risks I’m assessing is as follows:

Due to persistent warnings, sounding from various directions, that Democrats/Obama/Hillary camp will successfully falsify election results, I do believe many different eyes will be watching this election like hawks. Thus, it will be very hard-to-impossible to falsify it VERY significantly – as per Earth Shift Report 16 prediction. Some falsification attempts have to be expected, but not SIGNIFICANT ones that can make a true difference! Falsifying outright, due to the risk of extreme violence and uprisings, will be too risky and destabilizing. That’s why they will calculate that it’s easier to make a deal and compromise, which long-term will put Trump in a straight jacket. Again, as per Earth Shift Report 16 part 2.

But there is more to the story, and the future unfolding for the US is very interesting indeed. I’ll talk about that in one of the following ESRs in 2017!

If you haven’t yet, listen to how I see the outcome of this US Elections, and who will win, Trump or Hillary. Most importantly, what can we expect from Trump, should he win. What kind of president will he be and whom he really represents; whether I see violence on American streets past November 8; whether we can expect a breakthrough in relations with Russia and in USA’s policies and economy, and much more….

Listen to my EXCLUSIVE new bestseller

Earth Shift Report 16: US ELECTIONS & WHAT WILL HAPPEN AFTER 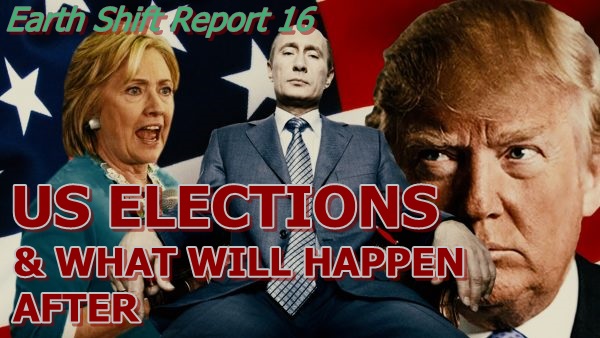 Listen to FREE Part 1 of ESR16: US ELECTIONS AND WHAT WILL HAPPEN AFTER

ESR15: PUTIN’S PLUTONIUM ULTIMATUM TO THE US

Check out All EARTH SHIFT REPORTS!

← Listen to FREE Part1 of EXCLUSIVE Earth Shift Report 16: US ELECTIONS AND WHAT WILL HAPPEN AFTER
Putin about ‘unbelievable idiots’ who organized energy blockade of Crimea →