This post is dedicated to those in Novorossia, Donbass, Malorossia and Ukraine who retained their dignity, reason and soul and who never surrendered. Not all hope is lost for the people of Ukraine while at least one person is left who dares to do and say this…

To the brave women of Donbass (2014-2016). This, very nice song was written by a man to celebrate the brave and beautiful women of Donbass who went into Opolchenie (self-defence) in order to protect their land from the invading Kiev junta ukro-nazis:

“Our girls are in the trenches, and though shedding tears by night, they don’t bustle around a warm kitchen, but bravely respond to invader’s attack. Not at a shopping mall or a salon, but clenching their gun, they fight against ukrops (LR: ukro-nazis), not sparing either bullets or grenades.

And only at night you see your home and dawn over a morning river. We’ll survive till the victory – there is simply no other way. No more shootings, no more war, children’s laughter flies around, and happiness abounds when the old snow melts in the spring.

Our girls have become older and their temples are white at twenty of age, our girls have become wiser and they don’t resort to cocktails to drown their sorrows. They fight for our native Donbass steppes and ancestral home and that’s why fascist chains will be broken and victory will come.

And only at night you see home and dawn over a morning river. We’ll survive till the victory – there is simply no other road for us. No more shootings, no more war, children’s laughter flies around, and happiness abounds when the old snow melts in the spring.”

May 9, 2014, Zaporozhie. No parade, deserted central street. Sole vet on bike with banned WWII Soviet Victory Banner and a telling song about “our capital Moscow being behind us”! Real attitude of locals towards junta: notice a man running up to him to shake his hand and people on a sidewalk clapping:

This is the interview with this vet, Petr Nikitich Koloskov, dubbed after the event ‘a national hero’: he’d decided to come out when he heard that parade was banned and he promised to come out again in 2015.

May 9 is celebrated everywhere in Russia and the Russian World as Victory Day. On that day (or rather night, still May 8 in Western Europe), Hitler’s army signed its capitulation in Berlin. The Great Patriotic War against Nazi aggression, which the Soviet Union won at the cost of 27 million lives and complete destruction of the country, ended that day in a ‘victory with tears in one’s eyes.’ It is traditionally celebrated by parades of army and vets, as well concerts. Striped gold and black Georgievskaya Bands (lentochka) are worn as a symbol of victory and heroism; replicas of the original Victory Banner installed by the Soviet Army over the fallen Reichstag are traditionally carried in parades. After the ukro-nazi junta headed by Poroshenko (Valtzman) and Yatsenyuk came to power in Ukraine, The Great Victory parades, concerts, Russian songs and films, and all Great Victory symbolism were banned. Ukro-nazi thugs attacked anyone who dared to come out with Georgievskaya Band and/or Victory Banner.

Kharkov, May 9 2015: Police halfheartedly try to convince Soviet Army vets to take off their Georgievskaya Bands, while the retired colonel, in full regalia, explains to police captain, whom he outranks, that he can’t take off the symbol of his father’s and grandfather’s victory. “I served in the Soviet Army and I swore allegiance to the great state of the Soviet Union. I respected and admired it and no one has the right to insult our memory.” Next to him, another vet tries to get into the War Memorial wearing a Georgivskaya Band with a Victory Banner pin, while being blocked from entry by police. Back to the colonel, who goes on to people’s clapping: “I spit on your Yatsenyuk and Valtzman (Poroshenko) laws, on all this junta that came to power after a coup and that made us, brother Slavs, kill each other in Donbass.”

Since Kharkov is in its absolute majority pro-Russian and anti-junta, but afraid to protest after a brutal crack-down, police are afraid to be very forceful. In general, police in many Ukrainian cities and towns have a double position. On one hand they don’t want to antagonize the population and be branded ukro-nazis with subsequent payback, on another hand, they want to continue receiving salary. As a result, in most places their behavior is half-hearted and confused, or indifferent. They often turn a blind eye to what ukro-nazis are doing, including robberies, assaults and killings. But they make elderly vets take off their WWII memorabilia, because Kiev tells them so.

Generally, all normal, honest people left Ukraine army and police. There were several purges in the army, police and SBU to rid them of ‘pro-Russian’ element. Despite that, the allegiance to Russia turned out to be so ‘pervasive’ that, despite US financing to re-hire western Ukrainians and foreigners for most police and SBU posts and a wholesale effort to fire anyone whom a lie detector test would flag, to this day Kiev junta doesn’t trust their police, army and SBU.

“Look around and back, notice how it was before and how it is now. We forgot how to forgive, even our closest people. We don’t appreciate what our ancestors did, the money has more value to us than our souls. And our children will grow just like us.

The government, you live in mansions, while the elderly suffer without apartments, vets are forced to beg on streets, they don’t need much, just some food and medicine. They want to live, and you are finishing them off. You kill them off! Have you forgotten that these vets once saved our lives, so we could live? They survived the war and this means they’ll outlive you, too. Outlive!

Aren’t you ashamed? How long will you go on lying? Everything’s going down, except skyrocketing prices. How will they live? And you are fat pigs, riding around in limos to expensive restaurants and boutiques. If you are deputies, live for the country. The value of life is lost to you behind your money. You have everything and that’s why you don’t see your own people.

Some have picked up and left. The hardest thing is to stay and change what has been forever neglected. This is our motherland, we were born here and we should die here. These aren’t just words, they are my soul’s cry. I am tired of watching this broken country. It’s been like this for 20 years. This is our country and we won’t be evicted. Let’s appreciate it and remember our past. Remember the past! She’s our only, invincible and forgotten by us, but still ours – Rodina (Motherland).”

Lada Ray: This boy’s pretty brave, too. I notice he picks his words very carefully, and kinda waltzes around the issues. In some cases one could interpret what he says in an ambiguous way, which could create different associations in different people. This is done on purpose, to pass censorship and so not to be attacked by ukro-nazis. But all in all, anyone who has half a brain can put the 2 and 2 together in his logical chain: we forgot how to forgive our closest people and live by truth – remember the country’s real past –  forgotten vets – this junta government is corrupt – money took over our souls –  Ukraine is broken and needs to be fixed – we have one Motherland, even if we’ve forgotten that. The hint is clear for those who care to see: Russian word Rodina, sounding the same in Ukrainian, is associated with Big Russia or the Russian World.

Also the theme of holding the fort and not leaving, despite the hardship, is a strong one here. I have to say that I’ve been thinking a lot about that lately. Millions fled Ukraine in the past 25, and especially in the past 2.5 years. They won’t admit the real population loss, but according to Dr. Natalia Vitrenko, Head of the Progressive Socialist Party of Ukraine, the population of Ukraine in 1990 was 54 million and now it’s down to around 35 million (I think it may be even less). In other words, the country lost 20 million people without a major war, simply as a result of its ‘independence’ from Russia and common sense.

Ukraine’s loss of the population is staggering, and the loss of talent is devastating. It’s no secret that the ones who have the most money, most talent and best skills are leaving. Also leaving are those who are the quickest and most resourceful. In other words, the last remaining life force is being drained. Without all that, the country has no future. 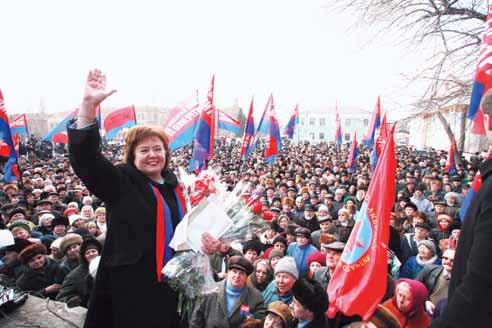 Incidentally, the brave Dr. Natalia Vitrenko is one of those who refused to leave Kiev, despite personal threats. Her party has been banned and is forced to operate underground. She and her party are considered probably the one last remaining honest and truthful political force in Ukraine. Vitrenko has been banned from Ukraine TV, but she continues trying to educate people and logically, with real facts in hand, explain Ukraine’s dire situation via VitrenkoNatalia YT channel.

We discussed much of this before in my articles and Earth Shift Report 2, 3 and 6. But it’s good to have this sought after perspective by Vitrenko, who’s great at historic details and who tells the truth like it is! Natalia Vitrenko: Nazi Ukraine as German-United States Project with English subs, Mar 7, 2016:

In the next post we’ll go beyond the physical and mundane and I’ll give you my energy and consciousness analysis:

1. What does Ukraine need to do to reclaim its soul and be reborn;

2. Will Russia help Ukraine, like it did so many times before;

If you recall, I have saved Earth Shift Reports 10 and 11 for the topics related to Russia. We are now returning to these topics. ESR10: THE CRIMEA FACTOR will be released a little later.

Today, I want to pre-announce the release of the new Earth Shift Report 11! This report will spell out everything to do with the Russian Duma and Regional Elections of September 18, 2016, also know as the Single Elections Day.

ESR11 will also address the hot and related global events, including: Syria (Kerry, Lavrov, US bombing of the Syrian Army and a rift within US elites); Ukraine (election attacks on Russian embassy and how Ukraine will survive the winter); Breakaway Pridnestrovie – PMR (intent to join Russia, Sheriff & attempt at PMR subversion, upcoming elections).

Among other things, you will be able to form your opinion as to how Russian elections are different from the elections in the US and other countries. You’ll learn my take on Russia’s various parties and election system.

You’ll find out the significance of United Russia’s win for the 2018 Russian Presidential Elections and Putin’s upcoming reforms, for the future of Russia as The Great Balancer and for Earth Shift.

We will discuss how Russian elections may influence US Presidential Elections 2016 and whether the result will help Trump.

This and much more in upcoming 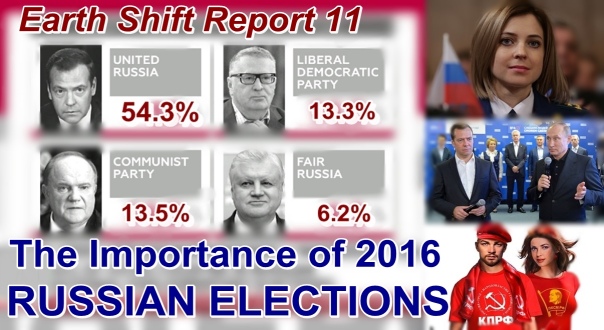