What’s the right term: Isis vs. ISIS vs. ISIL vs. IS? Is Assad Good or Evil?

I am pleased to announce that I am starting a new TESTIMONIALS page on LadaRay.info.

The best testimonials & reviews re. ESRs, FT articles and more, will be posted on this page: LINK.

Here is one such testimonial/review for ESR13: ERDOGAN’S WAR, which I greatly appreciate:

I can certainly understand the indignation at the usage of ISIS, which sounds just like Isis. It reminds me how Hitler usurped Swastika, the beautiful ancient symbol of our sun/galaxy, as well as the word Arian, turning both evil. There are other similar cases in history.

I sympathize with the emotional response of those who follow the Isis worship. It seems doubly unfair that a word symbolizing the sacred feminine is seemingly usurped by an extremist anti-women’s rights, Islamist sect. Like others, I also emotionally dislike that such nice words have been tarnished by darkness.

However, in my geopolitical and multi-dimensional analysis I invite you to get beyond emotions and to the very core of the truth.

Words are just tools, much like a hammer is a tool; they are neutral. Hammer can be used to build a lovely home, or it can be misused to inflict bodily harm. Same with words.

Alas, dark entities and deeds may turn words evil that have been neutral, or formerly carried a positive meaning. Look how evil entities managed to turn the formerly lovely Ukraine into a terrorist state, making the word ‘Ukraine’ highly undesirable, and even hated. The very words ‘evil’ and ‘darkness’ did not originally carry any negative connotation. It were humans who assigned them such connotation to fill the gap within the third-dimensional reality of duality and contrast.

Therefore, rising above third-dimensional duality, ISIS is an abbreviation, not a word, and it is the most accurate term. It’s unfortunate that it coincides with the name of goddess Isis. ISIS means Islamic State of Iraq & Syria.

IS – Islamic State – is not accurate since it may be confused with any random legitimate Islamic state on the planet, and I can see many objecting to that. Besides, it’s also what ISIS calls itself: why would you want to indulge the terrorists and call them their preferred name?

ISIL is equally inaccurate: it means Islamic State of Iraq & Levant. Levant is an outdated British colonial term, referring to the large territory, including Syria, Libya, Lebanon and Egypt. Hence, it refers to Western colonialism, plus, it implies the enlarged territory of ISIS. Instead of shrinking it, which should be everyone’s goal, ISIL assigns it more territory, in concurrence with USA’s goal in the Middle East. Therefore, ISIL is a subtle mind-manipulation, and so is IS.

You may have noticed that I usually qualify it by calling it ISIS/Daesh/Al Nusra, therefore there can be no mistake that I am NOT referring to the ancient goddess, but to the Islamist terrorism phenomenon.

Hope my comprehensive explanation is sufficient to put this issue to rest.

The world continues going through a tectonic Earth Shift, and everything around us is accelerating. I can’t believe that it’s been barely three days since I published ESR13: ERDOGAN’S WAR! So much has happened since, and continues happening!

On August 9 Putin hosted Erdogan and scores of Turkish military, politicians & business people, who were eager to get back on track and begin making deals. Huge turnarounds in various spheres are already happening, big announcements are being made (at least by Turkish and Bulgarian sides) in regards to Turkish Stream/South Stream, NATO bases and US precarious position in Turkey, plus the new page in Russia-Turkey-Syria relations. As you’ve read in ESR13, just before Erdogan, Putin met with leaders of Azerbaijan and Iran. The next day after Erdogan, Putin received the president of Armenia. All these events, following each other in close proximity, are interconnected. New, just recently unimaginable, alliances are starting to materialize. As predicted in ESR13, all this is a huge win for Russia and a huge loss for the US.

I’ve promised you all an update on Erdogan – Putin St. Petersburg meeting, the surrounding events and their Earth Shifting consequences. Those who have purchased ESR13: ERDOGAN’S WAR will be able to read the update first: it’ll be posted as ADDENDUM at the bottom of the report this Saturday. Later, the update will appear as free article on FT.

As Erdogan and Putin were preparing to meet, Ukraine attempted to attack Crimea twice in 2-3 days. Fire was exchanged, Russian Federal Security officer and a serviceman were killed, and a number of trained Ukrainian terrorists, complete with explosives and terror equipment, were taken prisoner by FSB.

You may not be surprised to learn that this attack is connected to Erdogan’s visit. But connections are much wider than that. This attack has direct bearing on US presidential elections and Russian Duma elections in September. It also comes after Russian government has announced that Crimea would become part of a larger Federal District.

The implications of the attack are far-reaching. Minsk and Normandy negotiations formats are affected; LDNR (DPR/LPR) status may change in a very positive way – I’ll discuss that in the forthcoming report; and the near future of Ukraine may become even more unstable. Who is behind this desperate attack, which could have never succeeded, who benefits from it and who gave the order?

Meanwhile, a coup to unseat Poroshenko is brewing in Kiev. Will he survive it, and what happens if he doesn’t? Lots of questions and they demand answers. I’ve been planning a new ESR: CRIMEAN AGENDA, but it has been on back burner. This may be just the time to release it! Stay tuned for more info!

Last but not least! UK PM Theresa May and Vladimir Putin had a phone conversation, in which they agreed to a personal meeting. This is good news. The events following Brexit vote have been developing just as I predicted in ESR12: THE FUTURE OF THE EU. I’ve been meaning to release a follow-up, with a broader outreach. The working name for the new ESR is BREXIT DOMINO EFFECT. Stay tuned for details! 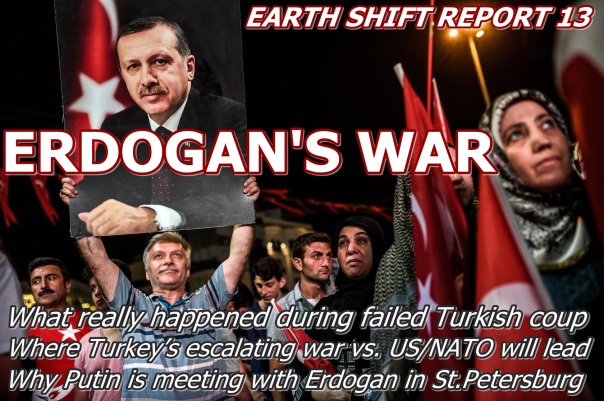