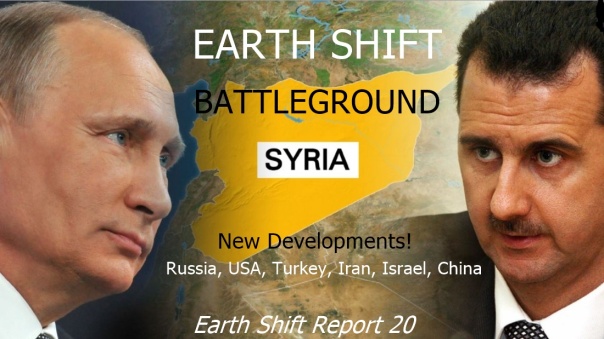 ​This may be one of the last and final Earth Shift Reports!
Your generous donations support FuturisTrendcast & Lada Ray’s free educational and enlightening work!

Throughout this extensive report the exclusive intel from Russia, Syria, Turkey and Israel is revealed, complete with Lada Ray exclusive predictions on Syria, the Earth Shift evolution and the future of Russian vs US influence in the key Mediterranean – Middle East region!

Summary: Russia’s campaign in Syria 2015-2017, Putin’s victory announcement and results
US/West’s unprecedented pressure on Russia as a response to Syria & why it never worked
​Russian Elections element and how it correlates with Syria victory and other events
Putin – the new Tsar of the Middle East, and Russia – the new preferred moderator
How USA’s waning as the world hegemon manifests in Syria & the Middle East

Iran vs Israel clash in Syria: Israel’s F-16 downing & Israel bombings of Syria
What are Israel’s and Iran’s goals in Syria
Will there be a serious escalation?
Why Netanyahu urgently called Putin

US fiasco in Syria: How USA formed a coalition with Kurds and why Russians let them
What is Putin’s long game?
USA’s new ‘Syrian liberation army’ disaster
Turkey vs Kurds: Why Erdogan invaded Syria and attacked Afrin, and who knew about it. My previous ESR5 predictions
What happened near Afrin — Assessment of the Turkish Army true capability
How US betrayed ALL of its allies in the region in one week
USA’s game in Syria – is Turkey now an enemy? NATO breakup threat due to Turkey

INTEL! The secret early warning system between major powers and how it works

What do Kurds want and where do they fit in this scenario
Russian brokered Assad-Kurd agreement and how Kurds suddenly saw the light
Why Syrian army has entered Afrin? Can Assad reconcile with the Kurds?

FALSE FLAGS, DOWNING OF THE RUSSIAN JET & WERE RUSSIANS BOMBED BY THE US IN SYRIA?

False flags and who’s behind them: Russian bases get attacked by ‘ISIS’ drones
Russia Su-24 jet gets shot down, Russian pilot dies heroically. Was it done with Turkey’s knowledge?
Russian retaliation
Whose side is Turkey on? Turkey’s steps after the Russian pilot downing and what do they tell us?
Why Russia cooperates with Turkey

Rumors answered: did the bombing of the Russian private military company Vagner take place in Syria?
What is the truth: Did the US really bomb a Russian convoy? Are there 200 dead? Were those Russian Army servicemen?
Who and why spreads these rumors and what really happened – Maria Zakharova’s official announcement.
Why the Russian Army did not engage

Putin and Trump: what’s going on behind the scenes?
Will US leave Syria or stay forever? What does Trump really want?

WHAT IS REALLY ISIS & SYRIA’S FUTURE

The true nature of ISIS and how ‘moderate opposition’ works

Syria EARTH SHIFT:
Russia/Kazakhstan sponsored peace process: Astana and Sochi successes vs Geneva fail
Assad and the real situation in Syria
Reconstruction has begun. Assad’s promise and WHO gets the first pick:
​What lucrative Syrian contracts did Russia pick (guess)?
What goals is Russia achieving with two Syrian naval/airforce bases?
EU & Turkey – new Assad allies? China: about to carve out a niche in the Middle East?
Guess who is conspicuously missing, and who is excluded?​

What is East Ghouta and where it’s located
Why is there a crisis in E. Ghouta
Russian attempts at cease fire, and civilian situation
Cornered terrorists and what they are after
Who is helping them and what is US doing there?
False flag & fake news? Did Assad use chemical weapons / Sarin gas in E. Ghouta?

Double standards or malicious collusion?
Striking Comparison! How E. Ghouta and Aleppo sieges are handled by Russia/ Syria VS how US / Iraq handled Mosul!