← Mass Migration: What Happens if a Country Gains or Loses its Life Force? (US, EU, Russia, China, Ukraine, Syria)
EARTH SHIFT REPORT 16: US ELECTIONS & WHAT WILL HAPPEN AFTER →

EARTH SHIFT REPORT 15: PUTIN’S PLUTONIUM ULTIMATUM TO THE US

PUTIN’S PLUTONIUM ULTIMATUM TO THE US 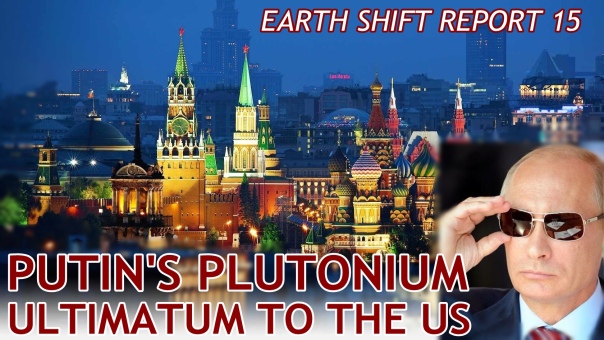 Due to the time sensitive intel and fast-evolving events, I am releasing two Earth Shift Reports one after another. Most likely these are the last two ESRs this year and I’ll let you catch up reading and listening to them at your convenience. Don’t let the fact that all this info is released so closely together deter you. ESR15 and ESR16 contain some of the most important deep intel and predictions you’ll ever be able to read or listen to (see ESR16 announcement below). And I promise they’ll be entertaining, too!

Reports, as usual, are donation-based and we do not set a specific amount, appreciating that different people have different financial circumstances.

If you want to support FuturisTrendcast, Lada Ray YT channel and Lada’s work, this is your best chance this year!

As always, thank you for your continued support, intelligent comments, and generous donations! I couldn’t do it without you!

The heart of this report is the story of Putin’s Plutonium Ultimatum to the US. This is one of those stories that have been shunned by the Western press and politicians, despite its global significance.

The reason it has been shyly avoided is because the US has no idea how to respond and they are afraid that by acknowledging it, they’ll vividly demonstrate to the world their intrinsic weakness. In other words, they are deathly afraid the world will finally get it that the king is naked. Not only that, they are extremely afraid that this will diminish the chances of the chosen NWO and US elites candidate Hillary Clinton and give a new boost to Donald Trump.

As a result, even though the Plutonium Ultimatum has been widely discussed and analysed in the Russian in-the-know and laymen circles, it is a total hush-hush and a complete unknown to the Western public. Out of sight out of mind, close your eyes, pretend the new reality isn’t there and pray it all goes away: this seems to be the new childish tactic of the US and EU elites, who are way over their heads in the new shifting reality, as control they have taken for granted slips out of their hands, while they have no idea how to react.

The Plutonium Ultimatum story is very important and indicative of the unfolding Earth Shift and the rebalancing of global power. But this is just the beginning and hardly the only story in this report. Equally important to the future of the world, and equally silenced are the stories that are intrinsically connected to it. In Earth Shift Report 15 we will also discuss the following.

1. The Plutonium Ultimatum has its continuation: the deliberately unrealistic and therefore mocking demands by Russia follow – on par with the openly unrealistic, mocking accusations and sanctions US/EU implements towards Russia because of Ukraine and Syria.

2. But Putin’s ultimatum goes further, and this is crucial to know for anyone residing in the US: I explain how Russia can, if so desired, leave the USA without electric power, and in complete darkness.

3. I further explain why Russia is to begin supplying S-300 anti-missile anti-aircraft systems to the Syrian government, which was impossible to imagine just recently due to pleas of neighboring governments not to change the balance of power in the region. The S-300 anti-missile systems have begun arriving. What are the Russian S-300 and S-400 systems? Why are they so feared that governments stand in line to purchase them and others beg not to supply them to neighbors?

4. Why Russia is building a new Naval base in Syria. Why Russia is returning to the Soviet bases in Egypt, Vietnam and Cuba. And this is just the beginning – more to follow.

5. Russian Defence Minister Sergey Shoygu announced that in response to USA’s playing with fire and moving troops and weapons towards Russian borders, Russia will have a base right next to the US borders as well. Shoygu left it at that, and it made US generals go into a panic mode, inquiring whether the betraying Mexico or Canada (LOL) opened their territory to Russians. I’ll reveal the ingenious Russian plan.

6. All these events are interconnected. How it all began: the true facts and secret intel about the real reasons for the US bombing of the Syrian army and the underlying reason for Russia’s retaliation with Kalibr cruise missiles against the US Field Operations Room near Aleppo. Lots of crucial, brand new intel from my deep sources you haven’t heard before!

7. It goes further: Russian Defence Ministry’s newest intel on the provocation with the bombing of the Aleppo ‘humanitarian UN convoy.’ What really happened and why this false flag was needed.

8. This report also includes the newest from Turkey: despite the US pressure, Russia and Turkey signed the Turkish Stream deal, in addition to a whole slew of energy deals, which will re-draw the map of the energy balance in the Middle East, Eurasia, and the world.

In this segment we’ll discuss why the US was shunned at the World Energy Summit in Ankara, why Erdogan received Russian President Putin as the guest of honor, and why Saudis and Qataris suddenly prefer to talk to Russia (incidentally, per my prediction in prior Earth Shift Reports).

The consequences of the US/Canada painful shale industry fail, and what will happen with oil prices.

9. As usual, I will connect all the seemingly separate dots and give you my original take on the whole story. The escalation of tensions is the result of crazy and inadequate behavior of the US and its allies. They even managed to drag into the fray the poor silly French President Hollande, no doubt by threatening him in the upcoming 2017 French Elections. As a result of a spat with Putin, Hollande endured excruciating criticism from his own country: the right-wing and French MSM crucified him for damaging relations with Russia and making France a laughing stock. In this regard, recall my 2012 prediction that Hollande will fail to cater to the wishes of his electorate and that he’ll likely lose the next French elections! (See PREDICTIONS.)

However, the main discussion about both Russian and US Elections will happen in future reports. We’ll begin discussing the Russian Elections 2018 as we approach them in 2017. US Elections are the topic of ESR16 (see more below).

Putin at the BRICS Summit in Goa and the historic signing of the S-400 deal with India. Why there is such an exclusive club of those who possess the coveted S-300 and S-400.

Why US bombed Syrian Army, killing 82. Did Russia really retaliate by sending 3 Kalibr missiles to destroy the US Field Operations Room, and why? The real reason why US, UK, France and others are so furious.

False flag explained: Who and why bombed the UN humanitarian Convoy to Aleppo.

What is Putin’s plutonium ultimatum & Russia’s bold demands. Why US can under no circumstances fulfill these demands. The true Plutomium story – why is it so important?

Subsequent freeze of most Russia-US nuclear cooperation. How Russia, with one move, can plunge US into darkness.

Are US and UK turning into big Ukraines? US and UK threaten Russia with war? Is there a threat of new ‘Syria’ anti-Russian sanctions? Why US needs new round of sanctions now and what will EU do?

Putin cancels visit to France – what does it mean? France as a laughing stock? Hollande’s last days as president? Why Merkel picked up the torch: Putin, Hollande, Poroshenko for tea in Berlin?

Putin at the BRICS Summit in Goa and signing of the historic S-400 deal with India.

Russia announces the new Russian naval base in Tartus. Sergey Shoigu negotiations for the reopening the Soviet base in Egypt. Putin announces possible reopening of Soviet bases in Cuba and Vietnam. Russia will build a base just a few kilometers from the US territory? Where will that be?

Return to the 2014 tensions? New Cold War? WWIII on the horizon? What do the new direct threats of war by the US and UK mean? Will US risk direct confrontation with Russia?
Lada Ray view and predictions.

To read this report go to

PUTIN’S PLUTONIUM ULTIMATUM TO THE US

The main discussion about the US Elections will be next week, when I’ll release Earth Shift Report 16, dedicated to this globally important event and its consequences. ESR16 will be in the form of a two part EXCLUSIVE interview. I am pleased to announce that especially for this report, I’ll be interviewed by our favorite Paul Plane, the host of the Time Monk Radio’s show The Plane Truth.

You can listen to our past interviews on Lada Ray YT channel: scroll down to Lada Ray Interviews playlist.

Paul has been moving to another country and was unavailable for a while. I am thrilled to have him on. This is going to be a very interesting interview – don’t miss it!

I am being interviewed by my other favorite alternative radio host, James Bartley. My new Cosmic Switchboard interview will come out next Friday, October 21.
.

← Mass Migration: What Happens if a Country Gains or Loses its Life Force? (US, EU, Russia, China, Ukraine, Syria)
EARTH SHIFT REPORT 16: US ELECTIONS & WHAT WILL HAPPEN AFTER →
%d bloggers like this: