Per My 2012 Prediction! French Elections and the Rise of Marine le Pen and National Front

Marine le Pen’s National Front wins the first round of regional elections with a national total of about 30%. It’s ahead of Sarkozy’s Republican Party and the trailing ruling Socialist Party of Francois Hollande. National Front gained sharply in the past 3 years and is expected to win again in the second round of these elections. The result has stunned the two traditional parties.

Even if National Front doesn’t win (and barring some huge and almost impossible surprise, such as Sarkozy and Hollande uniting against le Pen, it will win round 2!), Marin le Pen’s star is clearly rising very quickly and definitively, while Hollande’s is plunging, as I predicted in 2012. Back then I also predicted the turnaround of the French policy – and it’s coming. When French policy changes dramatically, it will sweep the change into the rest of the EU. Of course, fully this will happen later, but it’s a good start!

If you think that French regional elections don’t decide that much, it’s true. Regional elections are not very significant per se, but they are considered an important litmus test and dress rehearsal in the run up to the French National Elections of 2017. 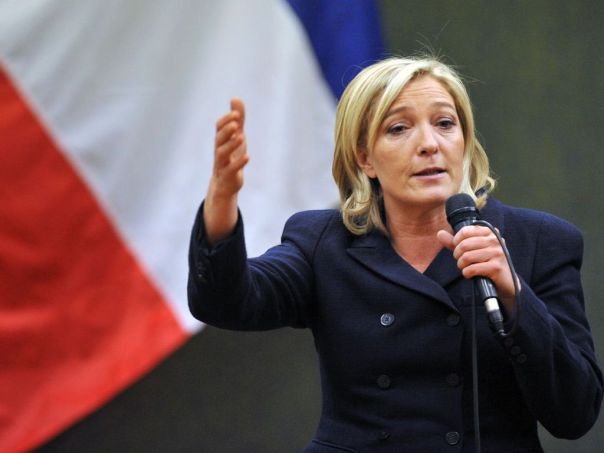 Marine Le Pen is a French politician who is the president of the National Front. Her party was third-largest political party in France in 2011. It grew into the largest party by 2014. More in Wikipedia

I want to note that what passes for ‘far right’ in France, in fact is a tough, but sensible and reasonable conservatism. What’s important is that it’s outside of either neocon or neoliberal ideology presently dominating the West.

Marine le Pen wisely took steps to soften the image of her party by dismissing her party’s tough far right ideologist, who, interestingly enough, happens to be her father and the founder of the National Front. This attracted scores of new voters. Le Pen is a consistent proponent of good relations with Russia, who’s also for France’s sovereign and independent policy. She is a huge critic of the EU in general and Angela Merkel’s policies in particular; USA and NATO skeptic.

In 2012 I had predicted the rise of Marine le Pen and her party.

Here is a quote from my French Presidential Elections 2012 article in which I predicted that Sarkozy would lose and Francois Hollande would win elections.

In a very funny twist, I am predicting that in the second round socialist Hollande (left) will take some of Marine Le Pen’s (far right) votes, along with the fourth place finisher votes (far left).

Seemingly, it doesn’t make any sense. But: the vote for Hollande is a vote against Sarkozy. This is a protest vote, pure and simple. Because, as I said in my January 2012 prediction: “[Sarkozy is] deeply disliked in his country and [that’s why he] will lose.” The French simply don’t want another five years with him.

In addition to Sarkozy’s ineffectual domestic policies and his foreign policy that is both too America-centered and too bellicose for the liking of the French electorate, there is also another reason. As mentioned before, the crisis in the EU continues to deepen and that spells disaster for the incumbent Euro leaders. So far, 9 governments have been ousted due to the European crisis, including Greek, Italian and Dutch. There are more to come. For Sarkozy, this spells the perfect storm.

On May 6, Nicolas Sarkozy will lose the election (which, based on his reaction after the first round has been a surprise only to him, but no one else). The next President of France, breaking with the long-standing French tradition of allowing a president 2 terms in the office, will be… Francois Hollande.

Most importantly, with the new man at the helm, the direction of French politics will undergo a certain change. There will be SOME change in the French attitude towards the EU and Eurozone. However, I wouldn’t expect TOO MUCH of a change at this time. Real change will come later.

Perhaps most notably, with the new president France will change some of its foreign policy. For one, France will stop playing, forgive the expression, “The French poodle” to the US foreign policy, the role it’s been playing during Sarkozy’s neocon tenure. France will re-acquire its more independent stance on foreign affairs, which it used to enjoy under various other presidents since Charles De Gaulle. And hopefully, France’s policy will acquire a more peaceful flavor, as support for invasions and bombings of other countries wanes.

However, if Francois Hollande fails to fulfill these deep-seated hopes of his electorate, the French people will likely vote him out of the office five years from now.

In that case, Marine Le Pen, the rising star of the French politics, emphasizing pride in France, its roots and culture; who is anti-emigration and anti-war, is likely to win the following elections in 2017.”

In 2012 I also predicted Barack Obama’s win, as well as Vladimir Putin’s win with the exact percentage of votes.

New predictions as of 11/24/15, incl. preliminary prediction for US Presidential Election 2016: